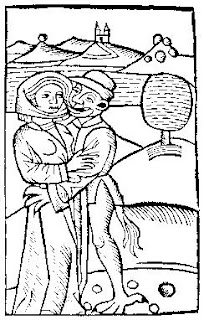 From childhood’s hour I have not been
As others were—I have not seen
As others saw—I could not bring
My passions from a common spring—
From the same source I have not taken
My sorrow—I could not awaken
My heart to joy at the same tone—
And all I loved—I loved alone—
Then—in my childhood—in the dawn
Of a most stormy life—was drawn
From every depth of good and ill
The mystery which binds me still—
From the torrent, or the fountain—
From the red cliff of the mountain—
From the sun that ’round me rolled
In its autumn tint of gold—
From the lightning in the sky
As it passed me flying by—
From the thunder, and the storm—
And the cloud that took the form
(When the rest of Heaven was blue)
Of a demon in my view—

~Edgar Allan Poe
Posted by Natalie at 7:16 AM No comments: 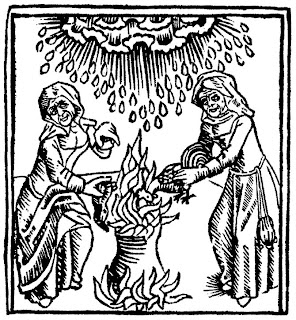 More than the broom, or even the stang, the cauldron is the classic witches’ tool. In classical Greece we find stories of the witch Medea who brewed the elixir of life and death in her cauldron. Across Europe among the Celtic peoples are tales of Cerridwen whose potion of Awen was simmered in her own cauldron for a year and a day, and Bran, whose cauldron would regenerate fallen heroes. The cauldron of Dagda also featured in the celtic myths. His cauldron poured  forth endless food and wealth. It is echoed today in tales of Baba Yaga and Strega Nona  both of whom have special cook pots that are never exhausted of food, provided that the correct magical phrases are uttered over them.

Even Shakespeare's infamous three witches from his play MacBeth are seen to gather around a cauldron and chant their nefarious rune.


Round about the cauldron go;
In the poisoned entrails throw.—
Toad, that under cold stone,
Days and nights has thirty-one;
Sweltered venom sleeping got,
Boil thou first in the charmed pot!
Double, double toil and trouble;
Fire burn, and cauldron bubble.
Fillet of a fenny snake,
In the cauldron boil and bake!


Robert Cochrane writes on the “two words that do not fit in the cauldron” as a mystery of the Craft. The answer to this riddle is “Be Still” for within the cauldron lies all motion, all potential, and all things. It cannot hold stillness, but this too is a mystery. The cauldron is used not just for the brewing of potions, but also as a vessel for scrying in liquid or flame. To accomplish this we must find stillness within the cauldron, by quieting our own minds.

The cauldron is also very similar to the Holy Grail of legend. We must ever seek it and its mysteries, for in it lies true communion with the Gods, and deep healing of our souls. “Who does the Grail serve?” is the riddle traditionally associated with this quest. The Grail serves all who seek it with honest intent, for it is only in not questing for the mystery that it serves no one.


“In fate and the overcoming of fate, lies the true Grail.” ~ Robert Cochrane

In our tradition the Cauldron is associated with the Grail Queen of the Silver Castle -- Castle Perilous -- as Cerridwen-Babalon. We drink deeply of her bloody cup, and rejoice in the coming of the Season of the Witch at the Autumn Equinox.
Posted by Natalie at 7:10 AM No comments: 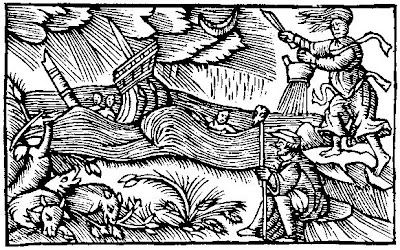 Witches were once believed to be able to raise the wind at their pleasure. In a confession made at Auldearn in Nairnshire in the year 1662, certain women accused of sorcery said, "When we raise the wind, we take a rag of cloth and wet it in water, and we take a beetle and knock the rag on a stone, and we say thrice over":


I knock this rag upon this stane,
To raise the wind in the devil's name.
It shall not lie until I please again!

When the wind was to be allayed the rag was left to dry.

In Scotland, sailors and fishermen would buy a piece of rag with three knots within it, from witches who were said to tie up the winds to fill their sails, The winds were released by untying the knots as follows: The first knot produced a wind to fill their sails, the second a strong wind, and the third creating a tempest or storm. Other examples of making the rain include tossing a flint stone over one's left shoulder or sprinkling water with a broom.

To Whistle Up the Wind

Like attracts like. As you focus your breath, so can you use it to whistle up the wind. Focus your energy and inhale. Infuse the inhaled air with your energy in a command. Whistle, and as you do, command the wind to blow as you are forcing the air from your mouth. The sharpness and tone and length of the whistle will denote the type of wind you are summoning. For example, a short, sharp and loud whistle will bring on a gust. The wind may also be controlled by the use of an old magical phrase:  Sha Gadda Galat. When used with the proper concentration and Will, these magic words will bring up the wind and will call in magic.

This spell should be kept for diverting severe weather only. To cut a storm you will need your black handled knife. Focus on becoming at one with the oncoming storm, and when you can feel the rush of the thunderstorm within you, run screaming at the approaching storm, brandishing your knife. Plunge the knife into the earth with the blade facing the wind. As you do this visualize the storm being cut in two and diverting itself around you.
Posted by Natalie at 8:29 PM 4 comments: 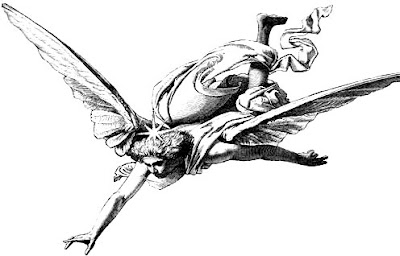 The Watchers, or Grigori, are ancient angelic beings associated with stellar lore that watch over witches. They are sometimes envisioned as the Watchtowers of the witch’s circle.

The Watchers are echoed in the four winds of the ancient Greeks, and in the four Archangels of Christian belief: Michael (Fire), Gabriel (Water), Raphael (Air), and Auriel (Earth). However, the Watchers are also mentioned as fallen angels in the apocryphal  Book of Enoch. These Watchers are said to have instructed the daughters of men in certain magical arts. The usual associations are as follows:
These Enochian Watchers were said to have mated with the daughters of men and produced a race of giants, the Nephilim, who were gifted with magical powers. These Nephilim possessed odd genetic traits that are similar to the “Witches’ Marks” of old, such as giantism, extra teeth, polydactylism, and supernumery nipples. Indeed, some modern witches still claim descent from certain specific fallen angels.
Posted by Natalie at 8:17 PM 5 comments: