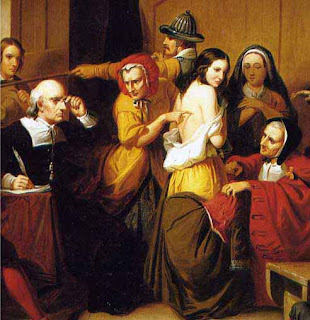 Some witches are born with a special mark upon them that singles then out as a person gifted with power.  Some traditional variations on this mark include: a specially shaped birthmark, a supernumerary nipple, polydactylism, red hair, extra teeth, and being born with a caul (a portion of the birth sac over the head).

Witch marks are created at certain rites of passage within our tradition.  They consist of a special symbol marked on the body, either astrally or physically, as in a tattoo.  Both the symbol and its placement of the body are significant to our tradition.

Some witches claim blood lineage from witches who have gone before.  This is known as possessing witch blood.  It is based on a very ancient notion from the book of Enoch that T'Qayin once mixed his seed with that of the daughters of Adam, producing a race of supernaturally gifted beings.  These beings are sometimes referred to as The Watchers.  It is said that this divine spark runs through the veins and sings from the bones of every witch.  Remember that you are made of the same materials as the stars, and that magic lives within you.  Even if you cannot trace your familial lineage to that of a known witch, know that through the forging of the Red Thread, the magical link that this tradition creates between you and the Mighty Dead, you share the blood of T'Qayin.

Is is told that for a witch to pass from this life into the next, she must pass her power on to another.  This provides incentive for teaching the Craft to others, ensuring that our ways do not die with us.  The Kuthun is a tangible object that links the power of a witch to her descendant. It may be a beloved magical tool, a piece of jewelry or regalia, or a formal document of lineage.
Posted by Natalie at 11:27 PM