Faces of the Oak King 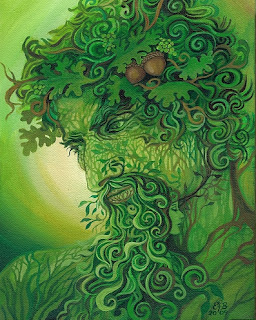 Cernunnos in Celtic iconography is often portrayed with animals, in particular the stag, and also frequently associated with a the ram-horned serpent, besides association with other beasts with less frequency, including bulls (at Rheims), dogs, and rats. Because of his frequent association with creatures, scholars often describe Cernunnos as the "Lord of the Animals" or the "Lord of Wild Things", and Miranda Green describes him as a "peaceful god of nature and fruitfulness".

The Green Man motif has many variations. Found in many cultures around the world, the Green Man is often related to natural vegetative deities springing up in different cultures throughout the ages. Primarily it is interpreted as a symbol of rebirth, or "renaissance," representing the cycle of growth each spring.

The wild man or woodwose is a mythical figure that appears in the artwork and literature of medieval Europe. Images of wild men appear in the carved and painted roof bosses where intersecting ogee vaults meet in the Canterbury Cathedral, in positions where one is also likely to encounter the vegetal Green Man. The wild man, pilosus or "hairy all over", and often armed with a club. The image of the wild man survived to appear as supporter for heraldic coats-of-arms, especially in Germany, well into the 16th century.


There are several examples of the Romano-Celtic God Vindos maq Noudons which can be easily referenced within texts. Most deal with the root "vin" which means "light" or "white."
Posted by Natalie at 10:55 PM