All Gods are not one God. The Ancients didn't see it that way, and we are not trying to put forth that claim, either. And yet, there are Gods -- great, ancient spirits (daemons ... δαίμων) who are so closely related in myth and religion that we can't mistake their relation. Just as a Red Thread connects us to the Witchfather who brought the Cunning Fire to humanity, so too does the Red Thread connect many of beings from whom mankind has sought wisdom.

This is our experience with Azazel (who is called a demon -- literally, a "spirit"-- and an angel -- "messenger"), Qayin/Cain and Tubal Cain, as we've expressed in other posts. Very directly, in our communications with the Witchfather, he uses these names of himself almost interchangeably, and we have come to use them the same way.

There are other sources of information, though, that inform our understanding of Qayin-Azazel, and we'd like to share them.

"Melek" means "king" or "angel" and "taus" means "peacock." The peacock angel is the central figure, the benevolent and creative demiurge, of the Yezidis. He is seen as repentant after the fall from God's grace, his tears quenching the fires of hell.

Though the Yezidis would disagree, others in the Arabic world (particularly those practicing Islam), equate melek Taus with Lucifer or Satan. Kabbalistically, Yahweh rules in the heavenly/spiritual kingdom of Kether, and Melek Taus (Lucifer/Azazel) rules in the earthly kingdom of Malkuth.

Within the sacred text of the Yezidis, the Black Book, specific reference is made to Azazel, equating the Peacock Angel with Azazel. There are several versions of this book extent from the Middle Ages, copies transcribed online.


We have touched on Azazel before, but there are some specific and noteworthy things to share about Azazel's connection to alchemical lore.

Enoch reveals to us that Azazel shares with humanity "all the metals and the art of working them...and the use of antimony." As it turns out, antimony (or stibium), was critical to the alchemical process of creating the Philosopher's Stone. This same element was called kuhl (or kohl) by the ancient Arabs. (You might also recall references to women decorating their eyes with this substance, and that art also being taught by Azazel. This may, in fact, have been a veiled reference to the alchemical process and not to cosmetics at all.)

Sir Roger Bacon tells us that when antimony is processed with vitriol, it is reduced to a "noble red oil" with all of the lesser sulfur having been purified out of it in the process. Red, then, is Azazel's color.

It is doubly his color when we consider that man is made from red clay, according to Middle Eastern tradition, and that Azazel is master of the material world from which man is made. 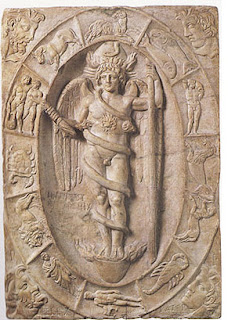 Oh my Holy Goat, there is so much that needs to be said about Lucifer in relation to the Witchfather. There is so much dross to sift through, so much misinformation that has been propogated about this one figure over the millenia, to reach the golden kernels of wisdom.

For now, let's keep it very simple, shall we?

Lucifer is the "light-bearer." He is Qayin in the East, the Morning Star. He is the torch-bearer of wisdom, inspiration, the Divine Spark, the Cunning Fire.

He is "Prometheus" (literally, "fore-sight"), who rebelled against God (the Gods) to give Fire (the Cunning Fire) to mankind and fell from Divine Grace.

The Nephilim, the "Fallen Angels" or spirits who descended into the material realm to interact with and guide mankind, were first seen as the "Shining Ones" or Gods of Sumerian lore. We've mentioned them before, and we'll write more about them in future posts, but for now, I'd just like to make the connection between Utu/Shamash and Azazel.

It's not a new connection. We're not the first to have made it, by any stretch. You can read this account, for starters. (There's lots of information there about goetic daemons and their counterparts in other lore.)

Utu is the Sumerian name, while Shamash is the Babylonian name for the Sun God of justice,law and salvation. He is linked in a triad with the Nannar-Sin (the Mood God) and Ishtar (the fertility-Earth Goddess, who incidentally is represented by the planet Venus, the Morning and Evening Star).

Ishtar and Shamash are divine twins.
Posted by Laurelei at 2:45 AM