The Dorset Ooser and Atho

The Dorset Ooser and the Head of Atho are two relics with ties to witchcraft that have both, sadly, disappeared.  Each of these relics ostensibly depicts the Horned God of the Witches, the Witchfather himself.

The Ooser was written about in Doreen Valiente's ABC's of Witchcraft and in Margaret Murray's The God of the Witches.  It was a hollow mask made of painted wood, trimmed with fur, and crowned with bull's horns.  The lower jaw of the Ooser was movable, and it possessed a strange convex boss on its forehead.  Valiente claims that this boss was representative of the third eye, a seat of psychic power.

The original Ooser mask disappeared in 1897, though a modern replica, made in 1975 by John Byfleet, is held in the Dorset County Museum, where it is taken out as a part of a procession of Morris dancers atop the Cerne Abbas giant on May Day and St George's Day, though some records indicate that in the 19th century it was paraded at Christmas instead.

It is unknown when the original mask was made, but appeared to be in a tradition of making animal and grotesque masks to be worn in procession; in the 7th century book Liber Poenitentialis by the then Archbishop of Canterbury, Theodore, he stated:


"whoever at the kalends of January goes about as a stag or bull; that is, making himself into a wild animal and dressing in the skin of a herd animal, and putting on the heads of beast, those who in such wise transform themselves into the appearance of a wild animal, penance for three years because this is devilish".


The etymology of the word "ooser" is of special interest to we Indiana witches, as we Indiana natives are labeled by the strange moniker "hoosier", which is a variation of ooser.  The Indiana Historian Jacob Piatt Dunn, Jr. found that the word, "hoosier" was used, in the south, to refer to woodsmen and rough hill people. Mr. Piatt traced this word back to England and the word "hoozer," meaning anything large in the Cumberland dialect. This was derived from the Anglo-Saxon "hoo" meaning high or hill. Mr. Pratt suggests that this word was brought from England and applied to people who lived in the southern mountains. This word then migrated north to the southern hills of Indiana. "Hoosier" is still sometimes used in the southern United States to characterize someone who is less then sophisticated, or more bluntly, an "ignorant rustic."

Thus, a hoosier is a Pagan!

The Head of Atho 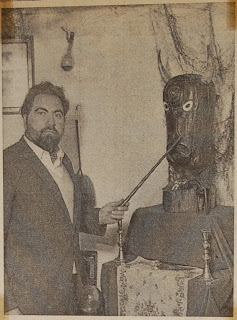 The Head of Atho was claimed by Raymond Howard and The Coven of Atho to be a genuine relic of the ancient rites of Witchcraft.  Although an article in the Eastern Daily Press from March 6 1967, stated that laboratory examination had shown the statue to be carved of English Oak around 2200 years ago, the head was recently proven to be a fake.

"It is hollow and has many witchcraft symbols carved on it... When a small crucible of water with a lighted candle under it, is placed in the back of the head, the result is awe-inspiring. The red glass eyes of the head light up and steam emits from the tips of the horns."

Only a month after the newspaper report, in April 1967, the head was stolen from Howard's shop, and was the only item taken in the robbery. It has never been recovered.

Doreen Valiente suggests that "Atho" is a corruption of the Welsh Arddhu, or Dark One. 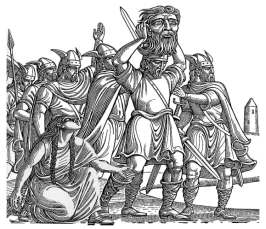 Why masks of the Horned God?  Why not horned crowns, or full statuary?  The imagery of the talking head is widely considered to derive from the ancient Celtic "cult of the head"; the head was considered the home of the soul.  Celts had a reputation as head hunters. According to Paul Jacobsthal,


"Amongst the Celts the human head was venerated above all else, since the head was to the Celt the soul, centre of the emotions as well as of life itself, a symbol of divinity and of the powers of the other-world." 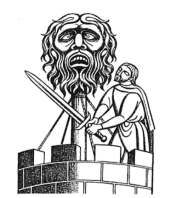 Arguments for a Celtic cult of the severed head include the many sculptured representations of severed heads in La Tène carvings, and the surviving Celtic mythology, which is full of stories of the severed heads of heroes and the saints who carry their decapitated heads, right down to Sir Gawain and the Green Knight, where the Green Knight picks up his own severed head after Gawain has struck it off, just as St. Denis carried his head to the top of Montmartre. The head of Bran is said to protect the British people and was said to continue to speak prophesy even after death.

The ravens of the Tower of London are said to belong to Bran, whose name means "raven".  It is said that should these ravens ever leave -- and Bran's blessing be revoked -- that Britain shall fall.