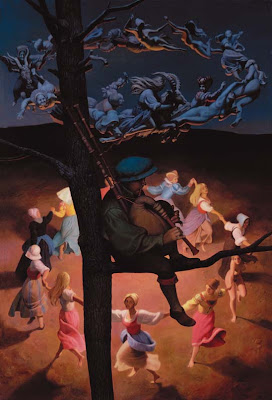 Once you have the compass laid, it is time to begin the magical work. But how does one act when in the circle?  In Wicca movement is always clockwise 'round the circle, but in Traditional Craft movement can be deosil or widdershins, depending on the rite.  Also there is a particular form of movement by which we raise power.  This is known as treading the mill.

Robert Cochrane discusses treading the mill in his typically riddling style in one of his letters to Joe Wilson.  Included below is the text.


This is known as "Approaching or Greeting the Altar". There are many altars, one is raised to every aspect you can think upon, but there is only one way to approach an altar or Godstone. There is a practice in the East known as "Kundeline", or shifting the sexual power from it's basic source to the spine and then to the mind. Cattle use this principle extensively, as you will note if you creep silently up to a deer or cow -- since there is always one beast that will turn its back to you, and then twist it's [sic] neck until it regards you out of it's [sic] left or right eye alone. It is interpreting you by what is laughingly known as "psi" power and that is how an altar is used -- with your back to it, and head turned right or left to regard the cross of the Elements and Tripod that are sacred to the People as the Crucifix is to the Christians.

If this business of cattle and kundalini sound confusing, it's only Cochrane's way of veiling the mysteries.  What he is getting at is that you are simply circling the "altar... of the Elements and Tripod" while looking over your shoulder at the altar.  You would look over your right shoulder to the center of the circle if you are moving clockwise, and over your left shoulder if moving widdershins.

So what is this secret "cross of the Elements and Tripod that are sacred to the People as the Crucifix is to the Christians"?  Cochrane appends a diagram of the device at the end of his letter to Wilson.  It is shown below. 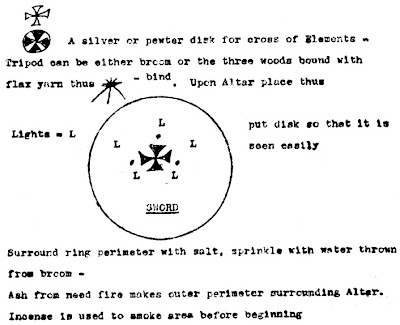 Looks rather ceremonial and pretentious, doesn't it?  Not at all like shamanic, folkloric, Traditional Craft.  Again, this was Cochrane revealing by concealing.  The item that forms the altar in the center of the circle that is as "sacred to the People as the Crucifix is to the Christians" is the stang.  The cross is the base of the symbol for the stang [ + ] and the tripod is the horns of the stang, the three rays of awen [ \|/ ]. Together they create the glyph that Cochrane signs with his name:

So, treading the mill is simply walking around the perimeter of a circle that has a stang raised at its center, while looking directly and intensely at the stang. It is the "crooked path".  The mill can be tread using the lame step, adding honor to Tubal Cain, and special purpose to the use of the staff.

The mill can be danced, although moving through the mill grounds can feel very much like one is hooked up to an old-fashioned mill stone like some beast of burden.  Treading the mill sometimes feels very much like walking against a swift current.

It can be helpful to sing or chant together in order to keep rhythm.  Collected below are some mill songs, some of which we have written ourselves, others which are traditional.

The Mill of Magic

Fire flame and fire burn, make the Mill of Magic turn.
Work the Will for which we tread by the Black and White and Red.

Earth without and earth within, make the Mill of Magic spin.
Work the Will for which we tread by the Black and White and Red.

Water bubble, water boil, make the Mill of Magic toil.
Work the Will for which we tread by the Black and White and Red.

Air breathe and air blow, make the Mill of Magic go.
Work the Will for which we tread by the Black and White and Red.

Power of the Elements

Power of Sky and power of Wind and power of Air the North doth send,
We tread the Mill to work our spell, both by your Breath and by out Will.

Power of Spark and power of Fire, power of all our hearts' desire,
We tread the Mill to work our spell, both by your Flame and by out Will.

Power of Ice and Water free and power that hides in depth of Sea,
We tread the Mill to work our spell, both by your Wave and by out Will.

Power of Stone and power of Land and power of rich Soil in our hands,
We tread the Mill to work our spell, both by your Earth and by out Will.

Lady weave the Witches' fire
'Round the ring of Caer Sidhe's spire,
Earth and Air and Fire and Water
Bind us to you.

A very rough translation of which is: 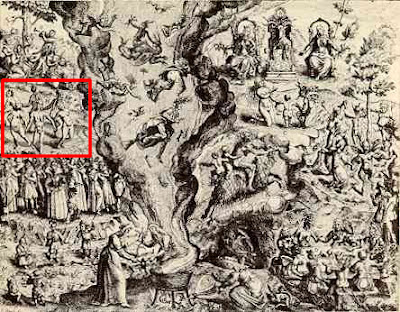 Apparently it was popular with some older curveens to dance the mill with their back to the stang, as is shown in this woodcut from 1594 of a sabbat at Treves.  You can see the dancers in the red box.

This sabbat's stang is alluded to by the enthroned goat with a flaming torch on his head, reminiscent of the stang, Janicot, and Baphomet.  Indeed, I wonder if this was once the way sabbats were held, with a horned God enthroned overseeing the proceedings in place of the stang? 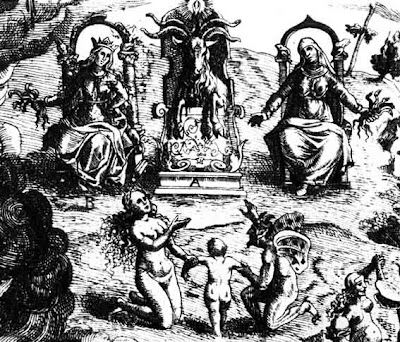