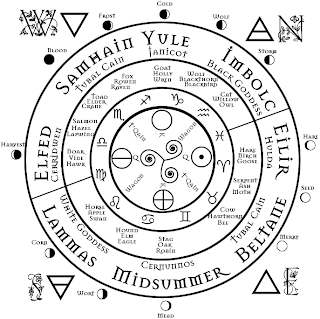 (This post has been edited, as of Oct 12, 2013 to reflect how we have grown into the laying of the compass.)

Most modern witches have been taught to work in a circle.  The circle is an organic shape that places each of its members as equals.  Energy flows smoothly when directed in a circle, and the circle serves as both container and barrier for various energies.

In our tradition we also work in a circle, although its creation and its purpose differ from the Wiccan circle.  Whereas Wicca has been influenced by Ceremonial Magical traditions to cast a circle to serve as a metaphysical protection from outside energies, we view the circle as a kind of cauldron. It is a container to intensify and direct energy from.

The cutting of the boundary is less important than the laying of the compass.  By laying the compass we invite the wards and energies of all of the realms and directions to be present in our circle. In our tradition we base the laying of the compass on our year wheel, and we call Powers that lie opposite each other as a pair. So for example, when calling the Gates, we call North, then South -- both being called toward the center of the circle. Thus, they form a road or an energetic pathway, with the Stang as the center point. The we would do the same with East and West, which creates two crossed roads.

We begin at the center of the compass and raise the stang.  The stang serves as the world tree and connects the three realms of upper, middle, and lower.  If we are going to voice the calls, we speak an evocation to the 3 Realms -- Upper, Middle, and Lower. At the base of the stang is the oath stone, or anvil.  It is on this stone that we make our blood oaths to the tradition and through which we call forth Tubal Cain.  Near the oath stone are the cauldron and the skull.  These represent the mysteries of life and death, and tie us to our ancestors.  Also placed at the center of the compass are the personal fetishes of each member of our Clan, and the three knives.

With the raising of the Stang and the calling of the Realms, the 1st Circle is cast.

Then we begin calling the next circle, which can either be the Elemental Gates or the Castle-Watchtowers. This really is up to you (or perhaps you will base it on the time of year. We often begin with whichever part of the Year Wheel we are actually in  -- so, Castle Perilous would be the first thing called, if we were closest to the Fall Equinox, West Gate if we were at Samhain. If you call a Castle, its opposite across the Circle should be next, followed by the remaining two Castles. The same philosophy applies to Gates. Call them as opposite pairs, as siblings, as light and dark halves of each other.) 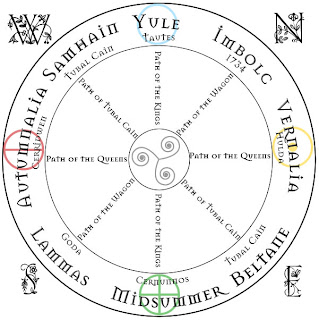 For this example, we are going to call the Gates as our 2nd Circle, beginning in the North.

At the north gate are placed the staves of the coven, along with the spear, and the troy stone, or gate stone. Also at this gate are symbols of the Black Goddess (including a lily) and totemic pieces associated with her.  Thus, an owl's feather, fur from a cat, and a stave of willow are all acceptable here. Any tools associated with air are kept at this gate, such as the censer if one is used. If the scourge is to be used it is also placed at the north gate.

The south is the gate of the White Goddess.  At her gate are placed red roses.  The weapon kept here is the targe, tool of earth.  The binding cords and the bread for the red meal are placed at this gate.  Horsehair, apples, and swan feathers are all symbols for this gate.

In the east are the tools of fire.  Here we place the blacksmith's trade (hammer and tongs) and keep a bonfire burning, if we are outdoors.  The coven sword is here, as is appropriate to a weapon of steel. This is the home of bull, hawthorn, and bee, so offering of honey, or mead in cow horns is appropriate. Also kept here are offerings for Tubal Cain, such as dark beer.

The west is the gate of water.  It is the quench tank of Tubal Cain. Representations of water are placed here, along with toad, and crane. Elder is only brought into the circle for certain dark magics.  The weapon of this gate is the helm, and the masks of the Clan are kept here.

Whether you speak words, silently call, dance, etc. is up to you. But having called the Gates, the 2nd Circle is now cast.

Now, we call the 3rd and final circle, that of the Castles.

At the north-east is the Castle of Revelry.  Here we place the lantern of inspiration and the broom. The totems are hare, birch, and goose, so a goose feather, a rabbit's foot, and some birch bark are all good to place here.  Also, if you can procure a model of a castle painted gold it would be well to place it here.

In the southwest is kept the silver chalice or quaiche, along with the red wine that it will hold.  Hawk feathers, vines, and representations of the boar or sow are also placed here.  The Castle Perilous is represented in miniature as a castle painted black with red accents.

At the northwest corner is the Glass Castle.  It is represented by the serpent's egg, or glass orb.  The totems are goat, holly, and wren.  Tools of divination are kept in this castle.  It would be nice if you can find or commission a small castle made of blown glass to place here.

The south-east is the home of the Stone Castle.  The stone bowl and the casting stones are kept here, along with stag horns, acorns, and oak staves.  A model fortress painted grey, or appearing to be made of stone, is placed here.

The 3rd Circle is now cast, at which point we usually acknowledge once more the center-point of the Compass, the Stang, the Spiral Castle, which opens into every place and is at the crossroads.

Thus is the compass laid. It may be as elaborate or as spartan as your tastes and needs dictate. Although the instructions above explain the placement of all of the gates, treasures, tools, weapons, and totems, simply treading the mill once and acknowledging the four gates and the four castles, along with their rulers, is enough to lay the compass.
Posted by Natalie at 5:29 PM