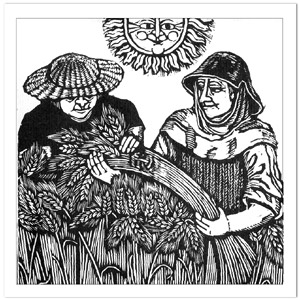 Lammas is the first of the three harvest festivals, and is sometimes called "first fruits". It is a symbolic wake for the Sacred King (the Oak King) after his annual sacrifice.  Although it seems here in the Midwest that summer is at its peak, Lammas marks the end of summer and the start of autumn.  It is a time for merry mourning, a recognition that the heady days of summer are limited and that we should rejoice while we can.

Lammas is one of the Greater Sabbats, which occur when the sun is 15 degrees in a fixed sign of the zodiac, in this case, Leo.  This typically happens around August 6th, although tradition places the date at the kalends of the month instead.  Also, since the Celts reckoned their days beginning at sundown, Lammas is properly celebrated beginning on the eve of August first.  Like all of the Sabbats there is a span of roughly twelve days surrounding the holiday that make up a season of celebration.

Lammas takes its name from the Old English "hlaf," meaning "loaf" and "maesse," meaning feast. This was the day on which loaves of bread were baked from the first grain harvest and laid on the church altars as offerings.

In Irish Gaelic, this feast was referred to as Lugnasadh (Loo-nah-sah), a feast to commemorate the funeral games of the Irish sun-god Lugh. However, it is not Lugh's death that is being celebrated, but the funeral games which Lugh hosted to commemorate the death of his foster-mother, Taillte. That is why the Lugnasadh celebrations in Ireland are often called the Tailltean Games. The word element "nasadh" relates to the Gaelic, "to give in marriage," and so Lugnasadh can be interpreted as the "Marriage of Lug."  In relation to this, a common feature of the Tailltean Games were the Tailltean marriages, a rather informal marriage that lasted for only a year and a day or until next Lammas. After the trial year, the couple could decide to continue the arrangement if it pleased them, or to stand back to back and walk away from one another, thus bringing the Tailltean marriage to a formal close.

Lammas was also the traditional time of year for craft festivals. The medieval guilds would create elaborate displays of their wares, decorating their shops and themselves in bright colors and ribbons, marching in parades, and performing strange, ceremonial plays and dances for the entranced onlookers. the modern expression of this is in the many county and state fairs that take place during this time.

There is a strong tradition of sacrifice associated with Lammas.  This is the day the Oak King falls at the hand of the Holly King in order to bless the land. The last recorded sacrifice of a king of England may have occurred at Lammas, in the year 1100. King William II (Rufus the Red, or William Rufus) rejected the relatively new Christian beliefs, and openly declared himself Pagan. His death in a "hunting accident" on August 2, 1100 c.e., is believed by many historians to have been a case of the traditional sacrifice being disguised for the sake of the Christian priests.  The novel "Lammas Night" by Katherine Kurtz (now out of print and hard to find) explores these themes of kingly sacrifice.  It also explores the old witch legend about English covens raising the Cone of Power at Lammas to stop the Nazi invasion during WWII.

Until recent years, in Scotland, the first cut of the Harvest was made on Lammas Day, and was a ritual in itself. The entire family must dress in their finest clothing and go into the fields. The head of the family would lay his hat on the ground and, facing the Sun, cut the first handful of corn with a sickle. He would then put the corn Sun-wise around his head three times while thanking the God of the Harvest for...
"corn and bread,
food and flocks,
wool and clothing,
health and strength,
and peace and plenty."
This custom was called the "Iolach Buana."

In the British Isles, the custom of giving the First Fruits to the Gods evolved into giving them to the landlord. Lammas is now the traditional time for tenant farmers to pay their rent. Thus, Lammas is seen as a day of judgment or reckoning. From this practice comes the phrase "at latter Lammas", meaning "never", or "not until Judgment Day."

An old Lammas custom is the construction of the Kern-baby or corn maiden. This figure, originally made from the first sheaf, would be saved until spring, then ploughed into the field to prepare for planting. The Maiden thus returns to the field at Spring.  Another popular Lammas tradition is the rolling of Saint Catherine's Wheels. These are wagon wheels set ablaze and sent rolling down a hill, likely in imitiation of the sun's decline after solstice.

In our own tradition Lammas is the time of year when the White Goddess, who is the Queen of the Fey and Lady of Sovereignty, is at her shining peak.  The Spiral Castle is open to the south gate, and the earth sends forth its bounty in abundance.  It is is a time of celebration, and for "gathering rosebuds while ye may", for it is the last hurrah before the wheel turns to the dark of the year.

There are mysteries here, for just as surely as this is the wedding celebration of the Solar Oak King to the Goddess of the Land, so too is this his death.  Our Lady is La Belle Dame Sans Merci, and to be king you must wed She who is Death in Life.

It was on a Lammas night,
When corn rigs are bonny,
Beneath the moon's unclouded light,
I held away to Annie:
The time flew by, with tentless heed,
Till 'tween the late and early;
With small persuasion she agreed
To see me through the barley.

CHORUS
Corn rigs, and barley rigs,
And corn rigs are bonnie:
I'll not forget that happy night,
Among the rigs with Annie.

I have been blithe with Comrades dear;
I have been merry drinking;
I have been joyful gathering gear;
I have been happy thinking:
But all the pleasures ever I saw,
Though three times doubled fairly
That happy night was worth them all.
Among the rigs of barley.

You may listen to an interpretation of The Lammas Song from the 1973 version of the film The Wicker Man below.