Faces of the White Goddess 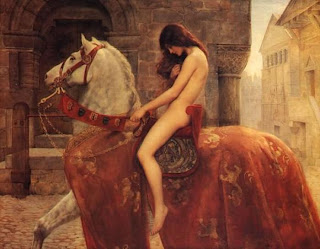 As mistress of the Wild Hunt, she is alternately known as frau Gode, frau Gaue, and frau Woden, demonstrating her connection to Odin. Agricultural customs of the region also preserve relics of pagan religion. When mowing rye, the villagers let some stalks stand, tie flowers among them, and when finished with their work gather around them and shout three times: “Fru Gaue, you keep some fodder, this year on the wagon.” In Prignitz, they call her fru Gode and leave a bunch of grain standing in each field which they call “Fru Gode’s portion.” In the district of Hameln, it was custom, if a reaper while binding sheaves passed over one, to jeer and call out: “Is that for fru Gauen?!” The name Gauen connects this legendary figure directly to Odin. In Old Norse, the fourth day of the week is known as Oðinsdagr, Odin’s day. In Swedish and Danish, it is Onsdag; in North Frisian, Winsdei; in Middle Dutch, Woensdach; in Anglo-Saxon, Wodenes dæg, but in Westphalia, they call it Godenstag, Gonstag, Gaunstag, Gunstag, and in documents from the Lower Rhine, Gudestag and Gudenstag. Similarly, in the History of the Lombards, the first literary appearance of Odin and his wife, Odin is known as Godan. Grimm observes that a dialect which says fauer instead of foer, foder will equally have Gaue for Gode, Guode. Thus, in Frau Gauen or Gauden, German farmers have preserved the memory of a Mrs. Odin at work beside her husband in the fields long after the coming of Christianity.

In the folklore of Lowland Scotland and Northern England, the Queen of Elphame, Elphen, Elfen or Elfan (and also Elfin Queen, Fairy Queen or Faery Queen) is the elfin ruler of Elphame (Elf-home; compare Norse Álfheimr), the usually subterranean Scottish fairyland. She appears in a number of traditional supernatural ballads, including Thomas the Rhymer and Tam Lin. She also appears in a number of accounts from witchcraft trials and confessions, including the confession of Isobel Gowdie.

But, in Tam Lin the Queen of Elphame is a more sinister figure. She captures mortal men, and entertains them in her subterranean home; but then uses them to pay a "teind to Hell". This ballad tells of the struggle of its heroine Janet, who must overcome the Queen's shape shifting magic to rescue a would-be victim from the Fairy Ride on Halloween. The Queen's shape-shifting magic extends to her own person. Mann's confession also noted that "she can be old or young as she pleases".
Posted by Natalie at 12:00 AM