Cords as Markers of Admission 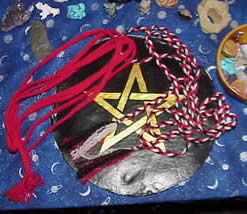 One of the Robert Cochrane (Roy Bowers) "writings" that  you'll want to read is titled "On Cords." It first appeared in issue 3 of The Pentagram in March 1965. In it, he discusses two aspects or uses of the traditional Witch's Ladder.

The first is the piece of magical craft that we'll be covering soon. It involves using the cord for spellwork.

The second use of cords is that of the devotional ladder. While many of us will make and use multiple devotional ladders for trance and meditation work related to a variety of focal objects, a great many Witches receive their first ladder as a cord (or set of braided cords) that marks their admission to a curveen.

The cords are usually a length of silk or wool rope, braided yarn, or upholstery cord, whose thickness, length and color vary by tradition. They are versatile, as they are used for cinching ritual robes, indicating rank or degree, measuring the circle, and sometimes for binding blood flow in certain circumstances. When used to control blood flow, they may also be called the cingulum.

Cords used as a cingulum help alter consciousness and they are often employed in initiation rites. There are a few different ways to tie the cords to act in this capacity, but the most common is shown below. However they are used, a cingulum should be administered with care to avoid causing damage or harm. 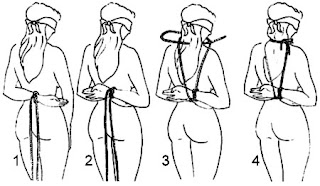 Cords can also be used as a meditational or trance tool in much the same way as a Catholic rosary. Because they are usually braided and knotted, often with multi-colored fibers, they bind together symbols and imagery that is important to the Witch who wears them. Meditating on a particular knot, strand, or other element of the cord will produce a focused experience on the symbol set contained therein, while working through all the knots (climbing the ladder) produces a transcendent state.

The Spiral Castle Tradition uses a specific progression of cords as markers of admission to the curveen. Each strand of cording that we use is made of a 3 hand-braided strands of wool yarn.

Greening -- single green cord -- This cord represents new growth, the beginning of the learning process and the budding interest of the green Witch in the curveen and Tradition. The purpose of the ritual is to form a magical link with loose bonds between student and cuveen and to establish the beginning of a learning period of at least three months. The Green Cord serves as a physical reminder of that link. Aside from interested adults coming to the Tradition, children of the curveen are eligible to wear the Green Cord (and thereby to acknowledge their relationship to the Craft of the Family) at the Age of Reason. This cord is cut and burned at the time that a Witch progresses to Adoption.

Adoption -- single red cord -- This cord represents the umbilical cord, the blood of birth, and the fire of Tubal Cain. It is a manifestation of the Red Thread. The purpose of the Adoption Rite is to forge a formal magical link between the student and the coven and to establish a formal training period of at least a year and a day. Again, the Red Cord serves as a physical reminder of the link between the Witch and the curveen, but it also reminds her of her link to all Children of Qayin. Children of the Family may be adopted within the Craft at the Age of Puberty.

Raising -- single black and single white cord braided together with existing red cord -- This set of cords is the final set that a Witch within our Tradition will use. The cords are fashioned so that there is a loop on one end, and a long set of tails on the other where the cords remain unbraided. The knot that hold the loop fast is the White Goddess knot. The knot closest to the tails (which somewhat resemble three flails of a scourge) is the Black Goddess knot. A knot is tied in the middle of the braided section -- the Tubal Cain knot. A Raised Witch is a full member of the curveen and Trad, and she wears the most potent symbols of our Craft when she dons her cords. Children of the Family are eligible for Raising, provided that theire knowledge and practice of the Craft is sound, at the Age of Majority.
Posted by Laurelei at 10:06 PM