The Stang, The Broom and the Spiral Castle

I (Laurelei) have worked exclusively in covens that have used the Stang as a central point of focus in ritual. Because of this, I have a couple of nifty pics of Stangs that were once near and dear to my heart. 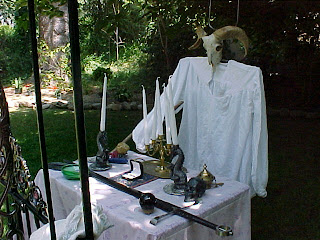 The picture above depicts the Stang adorned for a wedding -- hung with an arrow, which is draped with a white linen shirt. This adornment is used in other situations, as well, which we'll describe in detail in another post. (In the covens of my former Tradition, the Stang was located behind the main altar, which was oriented to one side of the ritual space. You'll note how that differs from the Spiral Castle Tradition's placement of the Stang in a moment.)


This particular Stang was made by one of my coven brothers. It had an Ash handle, iron horns (or prongs), iron foot, and an iron hook between the horns for hanging the ram's skull, arrow and candle. It was a tremendous piece!
The Stang in the picture above was the tool of the coven for which I served as HPS. It was a converted pitchfork, which meant that it also had an Ash handle and iron (cast-iron) horns. One of my coven brothers cut and ground down the middle prongs to provide us with the piece you see. At the time of this photo, it still needed its branding sanded off and its foot shod with iron.

In the Spiral Castle Tradition, the Spiral Castle itself  sits at the middle of our cosmological system. When we lay the compass, we signify this central focus by placing the Stang at the epicenter of the circle. At its base we place the anvil (and hammer), which is our Oath Stone; the skulls and crossed bones (representations and keys to the Ancestors); and our personal fetishes.

We envision the Spiral Castle as sitting atop a Tor, a ritual mound with a sacred chamber inside.

In his letters (have you started reading those yet?), Cochrane says that the Mystery of the Broom is "spinning without motion between three elements." He also relates this Mystery to the Qabbalistic Middle Pillar and the "path to the 7 gates of perception." He is, of course, talking about the practice of trance-work and meditation -- and using these tools (the Broom, is the metaphor for the tool) in order to access ALL THAT IS.

The Broom (according to copies of Cochrane's letters which I have that actually include illustrations) is constructed from a small, forked Ash staff. Between the prongs of the fork, a sacred stone is bound. The strips used for binding, the broom twigs, and the handle, are each different sacred woods. (Glaux is planning to reproduce the illustration soon.) The stone is a specific stone (which he calls "balanite," and we have researched to be none other than basalt).