Light out of Darkness, Darkness in Light

The three sacred colors of red, white and black appear in many forms and iterations in the Spiral Castle Tradition (as mentioned in this post), but one of the most direct and pervasive manifestations of these colors is in the three central Deities of the Trad: the Black Goddess, the White Goddess and the Red God.

The Red God -- Tubal Cain, the Witch Father and Lord of the Forge -- is consistent. We see different aspects of Him at Beltaine and Samhain, but He is always the Red God. His is the red thread that offers us the foundational fiber for weaving magic and connecting with the Mighty Dead. He is the fiery red of sunrise and sunset, and His is the light that kindles the forge deep within the earth. (Tubal Cain has deep associations with Lucifer, as the light-bringer and father of smiths. More on this soon, I promise.)

While the Red God has two places of honor on the Wheel of the Year and within the compass (East/Beltaine and West/Samhain), the other two stations of highest honor are seemingly divided. The White Goddess rules in the South at Lammas, and the Black Goddess dominates the North at Imbolc. In fact, these are two faces of the SAME Goddess -- the quintessential Witch's Goddess. She is both light and darkness. But just as the sun does not shine during the darkness of night, She does not fully reveal both sides of Her nature simultaneously.

The same is true for the Black Goddess (Kolyo), Cerridwen (the Queen of the Castle Perilous) and the dark half of the year.

However, as much as the Black and White Goddesses  (and Cerridwen and Hulda, for that matter) counterpoint each other on the Year Wheel and within the compass that we lay, we must acknowledge and understand that they work along a continuum. They are not truly separate from each other. One requires the other for full manifestation, and the dynamic balance maintained between the two (within the Year Wheel, the symbolism of the Trad, and the inherent energies They represent) is critical to the practice of the Craft as we know it. 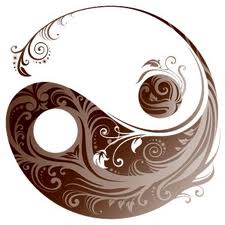 In fact, as we have worked with the raw and primal energies of the Black and White Goddess, we are struck again and again by the fact that each holds within Herself the core of the other. Within the darkness of the night, the light of the moon and stars reaches us. During the brightness of the day, shadows lurk.

Just as the white knife cuts in the physical realm, and the black in the astral; so, too, do the Goddesses relate respectively to the physical and astral. The two are, in fact, reflections of each other.

There are more and subtler messages in the interplay between the White and Black Goddesses, but this is enough to set you in the right direction.