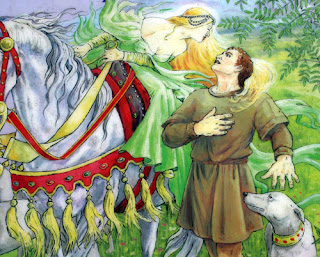 Sir Thomas was born in Erceldoune (also spelled Ercildoune - presently Earlston), Berwickshire, sometime in the 13th century, and has a reputation as the author of many prophetic verses. Little is known for certain of his life but two charters from 1260–80 and 1294 mention him, the latter referring to the "Thomas de Ercildounson son and heir of Thome Rymour de Ercildoun".  His reputation for supernatural powers for a time rivalled that of Merlin. Thomas became known as "True Thomas" because he could not tell a lie. Popular lore recounts how he prophesied many great events in Scottish history, including the death of Alexander III of Scotland.

Thomas interests us due to a 13th century ballad that was written about him and his time with the Queen of the Fae, who we identify as our own White Goddess.  Much can be learned of the ways of the Fairy realm and its queen by examining the lay.


Thomas the Rhymer
True Thomas lay on Huntlie bank,
A marvel with his eye spied he.
There he saw a lady bright
Come riding by the Eildon Tree.
The Eildon Tree was a sacred hawthorne in the hills of Ercildoun, where Thomas was said to hail from. And the hawthorn is also sometimes known as the fairy bush, for the fey folk are said to inhabit its branches and are its guardians. Sprigs of hawthorn and its flowers were gathered to serve as protection from evil.

Her skirt was of the grass-green silk,
Her mantle of the velvet fine,
At every lock of her horse's mane
Hung fifty silver bells and nine.

True Thomas he pulled off his cap
And bowed down to his knee:
"All hail, thou Queen of Heaven!
For thy peer on earth I never did see."

"O no, O no, Thomas," she said,
"That name does not belong to me;
I am but the queen of fair Elfland
That am hither come to visit thee."

"Sing and play, Thomas," she said
"Sing and play along with me,
And if ye dare to kiss my lips,
Sure of your body I will be."

"Betide me weal, betide me woe,
That fate shall never frighten me."
And he has kissed her rosy lips,
All under the Eildon Tree.
"Now ye must go with me," she said,
"True Thomas, ye must go with me,
And ye must serve me seven years,
Through weal and woe, as chance may be."

She mounted on her milk-white steed,
She's taken True Thomas up behind,
And every time her bridle rung
The steed flew faster than the wind.
The horse is sacred to the White Goddess, as a symbol of sovereignty, and her own horse is white, adorned with silver bells.

O they rode on, and farther on,
The steed went swifter than the wind;
Until they reached a desert wide,
And living land was left behind.

"Lie down, lie down now, True Thomas,
And rest your head upon my knee;
Abide and rest a little space,
And I will show you wonders three."

"O see ye not yon narrow road,
So thick beset with thorns and briars?
That is the path of righteousness,
Though after it but few enquire."

"And see ye not that broad, broad road
That lies across the lily leven?
That is the path of wickedness,
Though some call it the road to heaven."

"And see ye not that lovely road,
That winds about the fern'd hillside?
That is the road to fair Elfland,
Where thou and I this night must ride."
The three roads are the paths of life itself.  One may choose the easy life, which leads to damnation, the austere life, which leads to redemption, or the "middle road" that leads through nature, the path of the Ancient powers, the path that seeks balance, and leads to the Fairy realm.
"But Thomas, you must hold your tongue,
Whatever you might hear or see,
For if you speak in fair Elfland,
You'll never get back to your own country."
Witches are admonished "to keep silent" about the ways of magic if they seek success.  Likewise, the world of the fae operates under its own strange laws.

O they road on, and farther on,
And they waded through rivers above the knee,
And they saw neither sun nor moon,
But they heard the roaring of the sea.

It was dark dark night, and there was no sun light,
And they waded through red blood to the knee;
For all the blood that's shed on earth
Runs through the springs of that country.

While on the journey to the Fairy land Thomas and the Queen must pass through liminal space.  Here it is eternal twilight, though neither sun nor moon is seen.  The pair pass through a sea of blood, just as each of the castles of our tradition are bounded by a moat.  Indeed, the Castle Perilous is accessed by wading through blood.

Soon they came to a garden green,
And she pulled an apple from a tree;
"Take this for thy wages, True Thomas,
It will give ye the tongue than can never lie."
The apple is another sacred symbol of the White Goddess.  Elfland is sometimes equated with the Isle of Apples, Ynys Avalon.  The apple is red, symbolic of the food of the dead, and of the Housle.
"My tongue is my own," True Thomas said,
"A goodly gift ye would give to me!
I'd neither dare to buy or sell,
At fair or tryst where I may be."

"I dare neither speak to prince or lord
Or ask favor from fair lady -"
"Now hold thy peace," the Lady said,
"For as I say, so must it be!"

He has gotten a coat of velvet cloth,
And a pair of shoes of velvet green,
And till seven years were gone and past
True Thomas on earth was never seen.
Posted by Natalie at 9:04 PM