Faces of the Black Goddess 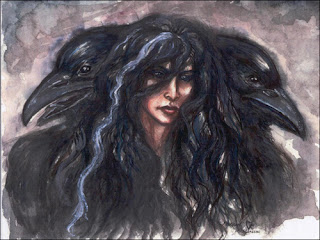 Kolyo (meaning the "coverer" and "hidden") is Great Mother of All - Ubiquitous, Omnipresent, Immortal and Eternal. In Indo-European Paganism, it is She who drives the Divine Drama and gives birth to the Gods and Goddesses. The Supreme Spinning Goddess, She is the First Timeless Source who regenerates All. A Being and Power older than Time itself, Kolyo spins the threads of Fate.

The word cailleach (in modern Irish and Scottish Gaelic, 'old woman') comes from the Old Irish caillech ('veiled one'), from Old Irish caille ('veil'), most likely an early loan from Latin pallium ('cloak'). The word is found as a component in terms like the Gaelic cailleach-dhubh ('nun') and cailleach-oidhche ('owl'), as well as the Irish cailleach feasa ('wise woman', 'fortune-teller') and cailleach phiseogach ('sorceress', 'charm-worker'). Related words include the Gaelic caileag ('young woman', 'girl') and the Lowland Scots carline/carlin ('old woman', 'witch'). A more obscure word that is sometimes interpreted as 'hag' is the Irish síle, which has led some to speculate on a connection between the Cailleach and the stonecarvings of Sheela na Gigs.

The name may also be related to the Hindu goddess, Kali, who shares many similar characteristics

The Morrígan ("phantom queen") or Mórrígan ("great queen") (also known as Morrígu, Morríghan, Mor-Ríoghain, sometimes given in the plural as Morrígna) is a figure from Irish mythology who appears to have once been a goddess, although she is not explicitly referred to as such in the texts.

The Morrigan is a goddess of battle, strife, and fertility . She sometimes appears in the form of a crow, flying above the warriors, and in the Ulster cycle she also takes the form of an eel, a wolf, and a cow. She is generally considered a war deity comparable with the Germanic Valkyries, although her association with cattle also suggests a role connected with fertility, wealth, and the land. She is often depicted as a triple goddess, but also as a goddess with five or nine aspects. The most common combination of three is the Badb, Macha and Nemain, but other accounts name Fea, Anann, and others.

Clíodhna (Clídna, Clíodna, Clíona, but sometimes Cleena in English) is a Queen of the Banshees of the Tuatha Dé Danann. In Irish literature, Cleena of Carrigcleena is the potent banshee that rules as queen over the sheoques (fairy women of the hills) of South Munster, or Desmond. She is the principal goddess of this country. It is said the wails of the banshee can be heard echoing the valleys and glens at night, scaring those who hear as the wail of a banshee is potent and instills fear in good people.

In Irish mythology, Nemain (or Nemhain, Nemon or Neman) is the fairy spirit of the frenzied havoc of war, and possibly an aspect of the Morrígan.
Posted by Natalie at 11:09 PM