Brigid Crosses
Imbolc, celebrated at the peak of winter around early February, is one of the four main fire festivals native to Celtic culture. The other festivals, commonly referred to in Neopaganism as the "Greater Sabbats" are Beltane, at the peak of spring, Lammas, at the peak of summer, and Samhain at the peak of autumn. Imbolc is usually celebrated on February 2nd and the night prior to it, although some celebrate the festival on its alternate date, astrologically determined by the sun's reaching 15-degrees Aquarius.

The earliest recorded instance of Imbolc comes from the Irish epic poem "Tochmare Emire", a part of the Ulster Cycle, where Cu Chulainn is attempting to woo Emer. Challenging the hound of Chulain to go without sleep for a year, Emer names the major calendar days, including:

"Imbolc, when the ewes are milked at spring's beginning."

The origins of Imbolc appear to be much older than the Ulster Cycle, however, as ancient inhabitants of Ireland built a number of Megalithic and Neolithic sites aligned with the sun on this day. Loughcrew burial mounds and the Mound of the Hostages in Tara, Ireland are two examples of these monuments. Here, the inner chamber of the passage tombs are perfectly aligned with the rising sun of both Imbolc and Samhain, so that the rising Imbolc sun shines down the long passageway and illuminates the inner chamber of the tomb.

Many neopagan texts state that Imbolc translates to "in the belly" or "in the mother" to signify the stirring and quickening of new life in the Goddess, but this is an incorrect translation. Although its linguistic origins are lost to time, Imbolc is thought to translate more accurately to "sheep's milk", or “in milk”. It is related to the Irish Celtic word folcaim, meaning “to wash”, and it is thought that Imbolc's Indo-European root word was related to both lactation and purification.

Purification is a reoccuring theme of this festival, and the fires associated with it. Saining, the process of ritually purifing something by exposing it to open flame, was common during this time, but in the form of small interior lighting, rather than the magnificent bonfires that were lept during Beltane.

Prehaps related to these purification aspects of the festival, or even the associations with a seed placed in the earth waiting to sprout soon after this time, Imbolc has become a traditional time for many neopagans to take oaths, or, in some traditions, undergo initiations.

Another aspect of the sacred fire highlighted during Imbolc is light. Imbolc takes place at the peak of winter, midway between the winter solstice and the spring equinox. The days at this point in the year are growing noticably longer, and the return of this light, along with the promise of the spring it brings, is celebrated at Imbolc. This reverance for light was transferred to the lighting of candles when the church transformed Imbolc into Candlemass. Even today it is tradition in some parts of Ireland to light every lamp or candle in the house on the eve of February 2nd.

In addition to Candlemass, the Church called February 2nd the Feast of the Purification of the Blessed Virgin Mary. It was believed that women were impure for six weeks after giving birth. Since Mary gave birth at the winter solstice, she wouldn't be purified until February 2nd. Mary was supposed to have gone to the Temple at Jerusalem to make the traditional offering to purify herself. As she entered the temple, an old man named Simeon recognized the baby as the Messiah, and a "light to lighten the Gentiles." Thus the themes of light and purification were kept alive on Imbolc long after its Pagan origins faded.

Imbolc is also known as Brigid's Day and is associated with the Anglo-Celtic goddess Brigid, who was anciently honored throughout areas that now include Britain, Ireland, and Northern France. She was widespread and known by many name variations including:

The goddess Brigid, presided over the hearth and the forge, over the inspiration and skill of sacred art and craft, and over the world of crops, livestock, and nature. In the Scottish Highlands every morning the fire was kindled with an invocation to Bride:

The 10th-century Cormac’s Glossary states that Brigid was the daughter of the Dagda, the “Great God” of the Tuatha de Danaan. It states Brigid to be a...

“woman of wisdom... a goddess whom poets adored, because her protection was very great and very famous."

Since poetry was interwoven with aspects of divination Brigid was also seen as the inspiration behind divination and prophecy, marking Imbolc as a festival associated with prophecy.

Brigid the Bright One is said to have had two sisters: Brigid the Physician and Brigid the Smith, but it is generally thought that all three were aspects of a single triple goddess.

The early Church could not very easily call the Great Goddess of Ireland a demon, so they opted to canonized her instead. She would become Saint Brigit, patroness of poetry, and healing. The church's explanation to the Irish peasants was that Brigit was actually an early Christian missionary, and that the miracles she performed misled the common people into believing that she was a goddess.

In some of the many legends about St. Brigit, there is a belief that she was the foster-mother of Jesus, Jesus having spent some part of his boyhood in Britain and Ireland, or that she was the mid-wife at his birth. 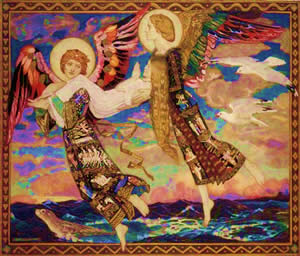 John Duncan's famous paining of Saint Bride
depicts two angels carrying her across the sea to nurse Jesus.
At her shrine in Kildare, a group of 19 priestesses kept a perpetual flame burning in her honor. In the twelfth century, Gerald of Wales wrote that when he visited the convent that there used to be twenty nuns keeping watch over the flame during Brigid's lifetime; but since her death, nineteen took turns, one each night, in guarding the fire. When the twentieth night came, the nineteenth nun put the logs beside the fire and said: “Brigid, guard your fire. This is your night.” In the morning, the wood was found burned and the fire still alight.

Brigid is honored on Imbolc, again by the kindling of sacred fires, since she symbolized the fire of birth and healing, the fire of the forge, and the fire of poetic inspiration.

On Brigid’s Eve, it was common during the eighteenth century to weave 'bride crosses' from wheat stalks, rushes, or straw, and place the weaving in a windowsill or from the rafters to give welcome to Brigid, who is said to walk the earth on this night. Ribbons were once tied to trees outside on Imbolc Eve so that they might be blessed by her wandering spirit to become powerful healing charms.

Welcoming Brigid was a common theme for Imbolc Eve, and even into the ninteenth century women on the Isle of Manx could be found weaving corn dollies into roughly human shapes, and dressing them in white lace and linen. These were then decorated with flowers, shells, ribbons, and crystals, with an especially bright bauble attached to the area over the doll's heart to signify the star over the stable in Bethlehem that led Bride to the Christ child.

These symbolic goddess figures would then be placed in a 'bed', usually a basket or small box, alongside a peeled and beribboned wand of birch or willow. The bed of Bride was then set near the hearth. One of the women would then open the door and call out softly, "Bride's bed is ready.", to which the remaining women inside would answer, "Let Bride come in, Bride is welcome." Together all would then chant "Bride, Bride, come in." The next day, divinations were made in the patterns of the ashes of the hearth. To see a "footprint" of Bride in the ashes was especially fortunate.

Today February 2nd is a time of weather prognostication, and the old Scottish tradition of watching to see if serpents or badgers came from their winter dens is perhaps a precursor to Groundhog Day. Alexander Carmichael's Carmina Gadelica preserves the rhyme:


"The serpent will come from the hole
On the brown Day of Bride,
Though there should be three feet of snow
On the flat surface of the ground."

In addition to the promise of spring, and prognostication, other neopagan themes common to Imbolc include the transformation of the Goddess from Crone to Maiden (the Maiden is usually symbolized by wearing a crown of candles), the nursing of the young sun God, the completion of 12 labors by the sun God, the and the peak of the Holly King's power. These differ according to various traditions.

The Spiral Castle is turned to face the North Gate, place of Air, Winter has a strong hold on the earth in our area of the country, and the Lady of Fate, Battle, and Life in Death holds sway.  The Wheel is about to turn to the light half of the year, and there is rejoicing for that hope, along with mourning for the things we have lost in the darkness.