Evan John Jones claimed that Robert Cochrane informed him that there were three branches of witchcraft. These were said to be memorialized on a megalith detailed in Justine Glass's much-maligned book Witchcraft: The Sixth Sense for which Cochrane was a source of information.  Though he intentionally provided Ms. Glass with misinformation throughout the book, he claimed until his death that the analysis he provided regarding the menhir and the Mysteries of Witchcraft were true. The meat of his analysis, available in full in Justine Glass's the book, is repeated as Craft teaching in Evan John Jones's work The Roebuck in the Thicket.

The first branch of mysteries is the masculine mysteries, centering on the legends of the Horn Child and the Sacrificial King (the Oak & Holly King stories).  The second branch is the feminine mysteries, centering on the mysteries outlined in Robert Graves' The White Goddess and the weaving of Fate.  The third branch, which Cochrane claimed was lost to time, were the Necromantic mysteries.  These have been reconstructed somewhat by modern practitioners like ourselves in rituals such as ancestral worship and the Tapping of the Bone.

The stang, revealed by PIE etymology to be a "stick" or "pole," is perhaps the most complex tool of Traditional Craft.  In it are contained each of the three paths of Craft.


The Stang and Male Mysteries 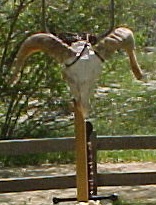 The most common interpretation of the stang concerns the masculine mysteries.  The stang is often thought of as a simple representation of the Horned Lord or Witchfather, with its forked tines standing in for the horns of the God.  Sometimes the skull of a horned animal is bound to the stang to reinforce this idea.  This practice may have old ties to the use of horned animals as a substitute sacrifice for the King.

Many, if not most, versions of Cochranite Craft use the same elemental quarter associations that we have described here before. Furthermore, EJ Jones actually writes about a very similar deity association, as taught to him by Cochrane, to what we use here at AFW.

East = Fire, the birth of the sun, the seat of the Horned Child
West = Water, the place of the dead, the seat of the Master of the Wild Hunt, the Sacrificial King
North = Air, winter, the Dark Goddess
South = Earth, summer, the Light Goddess

In both the East and West, though not always specifically identified with the name Tubal Qayin, we can recognize him in his guises as the light-bringer and the lord of the dead.

East and West, Fire and Water, are opposed in the Traditional Witch's compass, as are North/Air and South/Earth. Elemental opposites are called into the center along roads of power. We very literally have a crossroads at the center of the compass. What's more, we have a Devil who stands there. He is the Witchfather, the Horned One. The stang, with its horns, is symbolic of Qayin himself and of all the masculine mysteries.

The stang is often dressed by hanging two arrows (sometimes with points up, sometimes with them down) on the shaft. These arrows are symbolic of the male msysteries, as well.


The Stang and Necromancy

The stang is also the world-tree upon which we travel through the three realms.  It allows us to move from this realm to the land of the dead, among other places.  It is a gandreigh that we use to ride to the Sabbat, to cast the caim, and to center the compass.  These attributes make it a prime tool of magic, and one without which we would struggle to contact the dead. An animal skull upon the stang speaks of the masculine mysteries, but it also speaks of the Mighty Dead.

Often, a stang is outfitted so that it can hold a candle between its horns. The flame is said to be the Cunning Fire, the light shared by all Witches. When there is no candle, there is often a middle tine. This middle path, neither masculine nor feminine, is attributed to the Dead.

Our coven places skulls and bones (either crossed or uncrossed, depending on whether we intend to access the Dead or not) near the base of the stang, as well.


The Stang and Feminine Mysteries 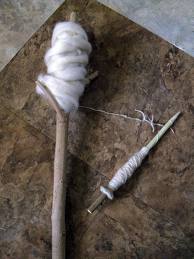 The third branch of witchcraft, and the third use of the stang, is as a traditional woman's tool -- that of the distaff. The older versions of a spinner's distaff was either a two or three pronged "stang" ("stick"). The distaff and spindle were once the main daily working tools of all women, and Cochrane is very specific in his writings about the distaff being the main working tool of women of the Craft.  The distaff is a traditional handspinner's tool used for holding raw fibers as they are spun into thread on a spindle.  Robert Cochrane in his writing "On Cords" states:

“The so-called ‘sacred object’ held in such reverence by some witches was in fact a weaver’s distaff–and could easily be mistaken for a phallic symbol. The weaver’s distaff, bound with reeds or straw, appears frequently in rural carvings and elsewhere. It again has reference to the Craft and supreme Deity. It would appear that the witches were not in the least influenced by Freudian concepts.”

Sarah Lawless, in her excellent post about magical sticks, suggests from her studies that the distaff/stang wrapped in flax for spinning was mistaken for a broom in folklore and art. Quite possibly. The stang is certainly a tool for travel.

Laurelei's first coven/Trad, which was also Cochranite in origin, didn't always hang two arrows on the stang. Often, it was a single arrow, with a linen shirt hung from it. The shirt was either white or black, depending on the ritual or time of year. We cannot deny that the stang is the hayfork that represents the Horned God, but it is also the spinner's distaff (a symbol, then, of the Black and White Goddesses).The linen shirt on a single arrow is an allusion to the flax wrapped around the distaff. 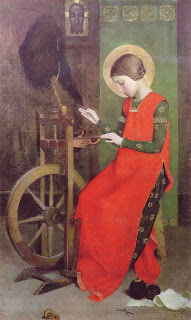 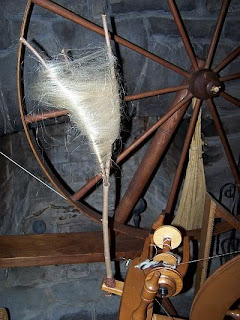 When we  view the stang as a feminine tool in the center of the magical space, the compass can be viewed as the spinning wheel of the Fates, our own Black and White Goddesses.

Stay tuned for upcoming posts regarding "Magic and the Stang" and "How to Construct and Dress a Stang."
Posted by Laurelei at 8:37 PM