The Stang on the Hill (or, The World Tree, or the Spiral Castle)

The Spiral Castle Tradition doesn't actively work with a "world tree" image, per se. That is to say, we don't use the image of a tree to serve the purpose of what the World Tree does in the cultures in which a World Tree is found. However, both our Spiral Castle and our stang upon the ancestral mound (which sits in the middle of the physical space of the compass as we work magic), serve exactly the same purpose, as I believe you will see.

Background and Purpose of the World Tree

The mythology and function of the World Tree seems to be a universal theme in cultures all over the world. References to a World Tree (or Cosmic Tree, Tree of Life, etc.) can be found in the Scandinavian, Finnish, Baltic, Hindu, Shinto, Native American, Mayan, Siberian, Hebrew, Christian, Egyptian, Mediterranean, Byzantine and Celtic spiritual beliefs and practices (to name only a few – the most easily discovered).

The World Tree takes many forms, extends in to many realms, is associated with many animals, but essentially has the same function in each culture. It always, no matter which version of the world tree is being described, connects the realms of existence in a sort of pathway that is (or is a symbol of) the act of creation. Through it, communication and the gaining of knowledge is possible. It is a symbol of both the macrocosm (the universe) and the microcosm (the person).  It is infinitely complex and surprisingly simple. 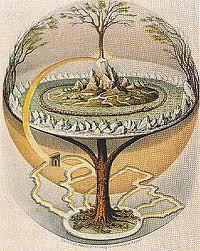 The World Tree connects the realms of existence as they are seen and numbered according to a particular culture. The most common representation of this seems to be the idea of three realms (sometimes being divided into three sections). The Upper, Middle and Lower Realms – usually described as the heavens, Earth and the Underworld; or the Land of the Gods, the Land of Men and the Land of the Dead.

Many of the Gods receive messages from animal or spirit beings who travel up and down the tree. Likewise, shamans and priest/esses the world over are said to have the ability to climb the tree to gain the knowledge/wisdom of the other realms and to communicate with both Deity and the dead. This allows them, then, to bring back the advice or wishes of the spirits that guard and protect human life. Indeed, one of the shaman’s or priest’s responsibilities has always been to know the wishes of Deity (in whatever form it takes) and to communicate those wishes and wisdoms to the people. 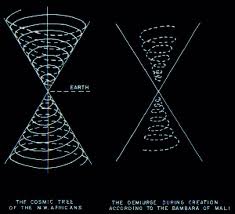 There is a body of evidence that suggests that the World Tree is a depiction of the “Consciousness Unit” (or CU) – sometimes also called the Collective Unconscious (though I think that is a misnomer since so many spiritual seekers are, in fact, conscious of it). Those who have been trained in out-of-body, meditative and astral techniques have all witnessed a similar structure that can be described as a tree. However, in some cultures, it was described as a mountain (hill, mound, Tor) or a tent (or in our case, a castle).

It is generally seen as nested spheres of energy or consciousness – one structure that houses several others, which house yet more. Although the people who saw it were all likely to have seen exactly the same structure, they used different words to describe it when they were once again in the physical world. This, of course, would all be based on cultural and linguistic limitations and understandings. The most universal description is that of a tree.

In many cultures, there is the pervasive use of the World Tree as a tool for the training and initiation of preists/shamans. Though the ceremonies differ somewhat, many of them involve a time of sacrifice upon the tree. Others require that the initiate climb the tree (either physically, spiritually or both) to seek information or to trace the steps of creation/wisdom. It is, of course, not surprising, then, to think of Odin’s 9 nights on Ygdrassil as a sort of initiatory model – leading to the use of vision quests, the witches’ cradle, and the actual climbing of a tree as part of the priest’s initiatory process. (The Hanged Man in the Tarot could be said to be suspended from the World Tree to seek a new perspective or initiation into greater mysteries.)

Stars and the World Tree

There is a great association between the World Tree and two specific celestial bodies. The first is the North Star (Pole Star). In many cultures, this star is said to be the pin or tack at the top of the World Tree. (It reminds me of the star atop a Christmas tree, though the association would have been much older than Christianity. It was probably a part of the Cabalistic mysteries, and therefore absorbed unwittingly into the Christian mythos. Or, which is more likely, since I have seen no reference to the Pole Star in the Cabalistic World Tree information I found, it was probably assimilated from the older Indo-European practices and beliefs. Perhaps the Yule tree used in so many Germanic tribes was, in fact, an echo to Ygdrassil.)

In fact, the Mayan calendar is said to spring from the World Tree. It is this same calendar which, with the Mayans’ uncanny mathematical understanding of the “wobble (or precession) of the Earth’s axis, dates the Winter Solstice of 2012 as the point when the next cycle of that same wobble will begin. It is on this date that the North Star, from the Earth’s point of view, will point directly into the center of the Milky Way.

The starry connections to the World Tree are significant for the Tradition at hand, as well. In Robert Cochrane's writings, pay attention to his references to "Caer Ochren." They are in close concert and connection to the statement "I am a Hill," which he follows up with a description of a castle of seven gates, upon a gloomy hill, turning to the elements.

I am grouping crosses and mountains together because I see them as two similar, perpendicular derivations of the World Tree concept. Mountains, specifically, have been mentioned in several works as other ways of seeing the CU (the thing that the World Tree represents – that is to say “everything.”)

I only go into this idea of perpendicularity because its recurrence seems significant to me. In fact, the World Tree itself is sometimes described as vertical, sometimes as horizontal. Perhaps it is both, in a sense. Or, it could be, as the Cabalists have described it, that there are two different trees that are essentially one World Tree. The Tree of Life, in this line of thought, is vertical, and the Tree of Knowledge is horizontal. (They are depicted as columns running between certain spheres.)

This perpendicular meeting between two poles/columns/pillars is the symbol of a cross. It is balance. It is life hinged on wisdom, and wisdom hinged on life. It is the cross of sacrifice as seen in the Christian mythologies. It is the equilateral cross of the elements in the Celtic cosmology. It is the tree on which Odin hung. Moreover, it is the crossroads at which magic and initiation happen.

Then there is the mountain, whose base is the horizontal axis. The line from the base to the peak is the vertical axis. In some cultures, a specific mountain has been their World Mount. And mountains the world over have been deemed as sacred. In fact, many cultures have created mountains as representations of the concepts embodied within the World Mount/World Tree concept. The Great Pyramid of Egypt is a prime example of this, while the Celtic Tors are examples known to many others. The sacred mountain connects the realms just as the World Tree does. The Torprovides access to the three realms. Medieval witches, too, were said to fly to Bald Mountain at Samhain for their great revel.


The Animals of the World Tree


Typically, eagles are said to dwell in the uppermost branches of the World Tree, with other birds living in some of the lower ones. Deer and horses are associated with the trunk of the tree, while snakes are seen twisting around the roots.

Although these images are fairly consistent throughout the various cultures, the Norse Ygdrassil houses all of them, and a few others. Specifically, there is an eagle at the top (which associates the eagle in my mind, then, with the Pole Star). Between the eagle’s eyes perches a hawk. There is a dragon that is twisted among the roots, as well as other snakes and serpents who help him gnaw at those roots. A certain squirrel delivers messages between the Dragon and the Eagle, who are feuding. Other bringers of messages associated with Ygdrassil are the ravens who bring messages to Odin of Midgard and Niflheim (the middle and lower realms). There are also stags, a goat, and a hart who roam the branches and trunk and eat the leaves of the tree.

Interestingly, the name of the tree means “Odin’s Horse” (because he rode it to attain enlightenment). This is interesting because so many of the other World Tree mythologies have sacred kings or gods tethering their horses to the trunk of the World Tree. Furthermore, the word Cabala is derived from the same Latin word as the word for horse (equus). (I know it seems like a stretch, but the Spanish word for horse is caballo, and the Italian is cavallo,which certainly show the progression of the word into derivations.) Therefore, horses are largely associated with the World Tree. So much so that at least one version of the World Tree is named as a sort of horse -- a means in itself of "traveling." 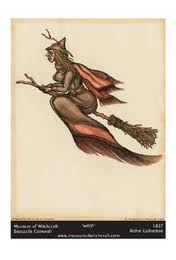 Just as a priest or shaman is trained to ride the tree, so is a witch or anyone of us of sorcerous ilk trained to ride the stang, walk through the Spiral Castle, fly on the broom. The broom, after all, is fashioned from a forked staff -- a stang at its heart! These tools are aids in achieving soul flight, in fully experiencing the world around and within us, before and behind us, below and above us. In a great many ways, they are all the same tool, just fashioned in a different package.
Posted by Laurelei at 9:52 AM