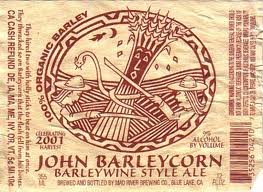 One way to think about the Year Wheel is to look at the balladry figure of John Barleycorn. The stations of his life, as marked int he verses of the song below, are the Sabbats -- at least the ones dealing with planting and harvesting.

They've plowed, they've sown, they've harrowed him in,
Threw clods upon his head.
And these three men made a solemn vow:
John Barleycorn was dead.

They've let him lie for a very long time,
Till the rains from heav'n did fall.
And little Sir John sprung up his head,
And so amazed them all.

They've let him stand 'till midsummer's day,
Till he looked both pale and wan.
And little Sir John's grown a long, long beard,
And so become a man.

They've hired men with scythes so sharp,
To cut him off at the knee.
They've rolled him and tied him by the waist,
Serving him most barb'rously.

They've hired men with the sharp pitchforks,
Who pricked him to the heart.
And the loader, he has served him worse than that,
For he's bound him to the cart.

They've wheeled him 'round and around the field,
'Till they came unto a barn,
And there they've made a solemn oath,
On poor John Barleycorn.

They've hired men with the crabtree sticks,
To cut him skin from bone,
And the Miller, he has served him worse than that,
For he's ground him between two stones.

The Huntsman, he can't hunt the fox,
Nor so loudly blow his horn,
And the Tinker, he can't mend kettle nor pot,
Without a little Barleycorn.

You can hear a snip (or, rather, 3 snips -- I swear it isn't a re-mix) of my favorite version of this song at PayPlay. While most versions of this song sound like dirges, this particular version relays what I feel is the joy of spring and the celebration of harvest. Yes, the words are "John Barleycorn Must Die," but I suppose I like singing these lines with a big toothy grin.
Posted by Laurelei at 8:06 AM