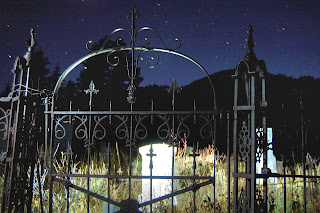 Samhain is the point in the Wheel that is directly opposite to Beltane, and the intents behind the holiday and the season are, subsequently, directly opposite to those of the fertility and mirth of Beltane. However, they are connected along the road that leads through the center of the compass, and they are both presided over by Tubal Cain, denoting their inherent connection and potency. In the case of Samhain, Tubal Cain guards the Western Gate of the compass, the gate that leads to the western sea and the immortal lands -- the Lands of the Dead. This is his quench tank, an alchemical mate to the forge fire of Beltane's East Gate.


Samhain is one of the portal times during the year, and it is one that many Pagans credit as the strongest portal time. It is a time when the veil between the worlds of the living and the dead is the thinnest, and communication and passage between the worlds is easiest. It is a time to commune with deceased ancestors and loved ones. Though we should honor and rever our ancestors throughout the year, this is the perfect time of year to set aside sacred time to honor those who have passed.

Of course, since the veil is so thin, it is also expected that some rather nasty spirits might enter through the veil at this time, which can cause folks to be wary. Guardians of various types have been placed at doors and windows and hearth (all the entry ways into the home) to keep unwanted and unwelcome spirits out. The custom of dressing in costume comes from the idea of disguising oneself so as not to be recognized by unfriendly spirits. 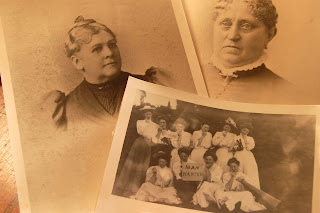 Furthermore, it has long been a time of remembrance. The ancients had a deep respect for their ancestors, and this was a time to remember the deeds of forefathers and foremothers. They would recall the names of the people in their lineage and honor them with feasts and gifts. The ancestors would have a special place in the home during this time.

Samhain is contemporarily considered to be the last festival of the harvest, and we have encountered two schools of thought as two how this plays out. One says that Samhain is the final grain harvest and that it was imperative that farmers have all of their crops harvested before sundown on Samhain night. If not, tradition held that whatever was left in the fields belonged to the Sidhe. (We've also seen this said about Fall Equinox, but that simply couldn't apply to American crops.) The other indicates that, in Britain, Samhain would have been past the final grain harvest and would have been into a time that we might consider a "blood harvest" -- the time for slaughtering livestock before the winter comes. Technically speaking, we like the mytho-poetry of both schools of thought. However, we are trying to be practical about the Craft that we practice and the area where we live. In Indiana (where we literally live surrounded by fertile farmland), the harvest cycle has looked like this:

* Lammas -- call it "loaf mass" if you like, but it's not grain we're pulling in; it's tomatoes and squash -- the first ... veggies!
* Fall Equinox -- apples, more veggies, early corn, early wheat, early soy -- It'll be another week or two before the grains are really ready.
* Samhain -- the rest of the grains have been or are being harvested now. It's a race. November really is too late. As for the "blood harvest?" Maybe so.

We celebrate Samhain as season, a "month" unto itself --  a two week period extending from October 15th until Octiber 31. This is a time for us to honor our genealogical and spiritual ancestors. We seek guidance from them, insight about the lessons from the pervious year and advice for work to be done in the coming year. We are making provisions within ourselves for the winter months ahead.  This is a time of reflection on death and rebirth -- contemplating beginnings and endings. As such, it is a time of introspection, reflection, communication with the Otherworld and Underworld. It is a time of profound spiritual growth. (It can be quite intense.)

We begin the cycle by Welcoming the Ancestors. In this ritual, we bring our skulls in token of all our ancestors – biological, spiritual, and otherwise. We then empower these skulls to be a vessel in which our ancestors can be manifest during the 13th month. Part of this ritual always includes a “genealogy chant” said by each person in attendance. (Women may name their mothers’ mothers, for instance as far back as they have knowledge of. Men may do likewise with their fathers’ fathers. Or, there could be a blending.) We work with skulls as a means of "tapping the bone" -- tapping into the knowledge, wisdom (hence, the skulls) and power of our Mighty Dead.  (As a note, human skulls, though *somewhat* available as curios, are extraordinarily expensive and are NOT necessary for this work. What you want is something realist -- either in look or material. Go for a realist replica from a science shop, a crafty skull of some sort, a Halloween prop that won't make you laugh, or an animal skull -- real bone, just not human.) 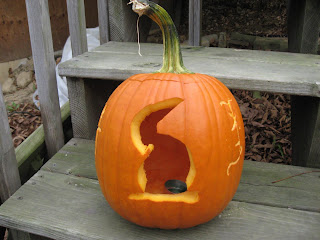 In the same general time-frame as the Welcoming the Ancestors ritual, we also empower our pumpkin guardians. Sometimes this is done as a group, and sometimes we do it individually. Whatever the case, one pumpkin is chosen for each member of the household, carved and empowered to protect that person and the home from harmful spirits during the 13th month. Some of the families choose an extra pumpkin to protect the family as a whole, as well. These are place outside the door and lit each night at dark during the duration of the 13th month.

The Dumb Feast is a ritual feast held to honor the ancestors. The entire ritual (from the point of laying the compass to eating the feast to finishing the ritual) is carried out in silence. A portion of the food from each person’s plate should be reserved for their ancestors. Their skull is placed in honor next to or in front of each person.

Individual dark mirror, cauldron, and skull trances -- We strive to do a great deal of individual meditation and trance-work with our cauldrons, dark mirrors and skulls, since they are among the key symbolic tools we associate with this Sabbat.