The Line of Cain 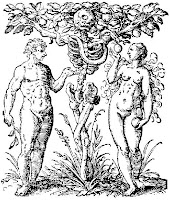 Cain/Qayin is the son of Eve through the serpent, Ha-satan. In Genesis when Eve says "I have begotten a man with the Lord" she is referring to Lord Satan-Lucifer.  His brother Abel was the son of Adam and Eve, a creature of clay made flesh, whereas Cain was a creature of spirit made flesh.

Cain was the first to till the earth and harvest plant matter. For this reason he is known as the Lord of the Green Kingdom.  While Cain harvested plants, Abel shepherded flocks of beasts.  When the time came for Cain and Abel to make offerings to Yahweh Abel's offerings of blood pleased Yahweh, but Cain's offerings of burnt plants did not.

It was for this slight in the eyes of Yahweh that Cain killed Abel.  Cain offered forth his most cherished gift of blood (his own brother) to Yahweh.  Abel's blood watered the field and made it fertile. The Necrosophic tradition claims that the blood of Abel that 'watered' the garden also empowered it, making the plants within linked to the bloodline of Cain. This is also the origin of plant spirits or the "Black in Green."

Because of the fact that Cain was the first murderer of man, he eventually became the reaper.  He is the Lord of the Western realms, and the guide of the dead.  Cain was also marked for his crime, and it is this mark (the Witches' Mark) that all children of Cain carry, though in diluted form.

Azazel was chief among the angels in the story of The Fall of the B'nai Elohim in the Book of Enoch.  The B'nai Elohim is a term that refers to angels. It occurs four times in the Old Testament and is rendered "Angels of God" in the ancient Septuagin translation. These fallen angels, or Watchers, descended to the realm of matter (earth) where they took the descendants of Cain as human vessels. They took women as their wives, taught them, witchcraft and other skills. Azazel took Tubal-Cain, the blacksmith, as his vessel and further improved the arts of smith craft and witchery. Naamah was the human vessel of Nahema-Lilith (Lilith the younger or Lilith's daughter).

The children of the watchers were the giants known as the Nephilim, which derives from the Hebrew naphal (to fall), or the Fallen Ones. (The Greek Septuagint renders this term gigantes, which actually means "earth-born." This is often misunderstood to mean "giants".  They were marked by extra teeth, extra fingers and toes, double crowned skulls, giant-ism, and other traits that future generations would interpret as witch marks.

The Watchers were originally the four stars Aldebaran (the East), Regulus (the South), Antares (the West), and Fomalhaut (the North).  Witches then, are those who can trace their bloodline to Cain -- the Red Thread -- and are the children of the stars.

For more information:
http://theisticsatanism.com/CoEvan/arguments/henotheism/Devil.html
http://www.ixaxaar.com/
Posted by Natalie at 10:45 PM