Meeting at the Crossroads (updated) 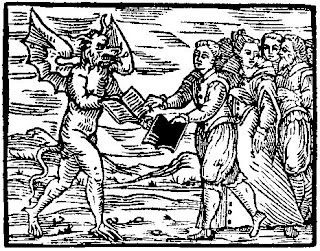 Liminal places are those locales that can be described as neither here nor there, and since time immemorial, they have been considered the very best places to meet the Witchfather (or Witchmother) and perform spells.  Liminal spaces might be include the mouth of a cave (neither in the belly of the earth, nor upon the land’s breast), at the seashore (neither in the ocean, nor upon dry land), at a doorway (neither inside the house, nor yet outside its bounds). But the liminal place that has fired the imagination and bred some of the most enduring folklore is that of the crossroads — the place where two or more roads come together and the traveler can stand for a moment in true limbo, on their way to anywhere.

It is in this place of balance, of limitless possibility, of undiscovered potential that magic and initiation are possible. The Seeker of the Mysteries has access to all that Is, Was, and Will Be.

Cultures from all over the globe have expressed this concept in a myriad of ways. Some embrace it, and some fear it. The Keeper of these Mysteries is most often viewed as a devil, demon, whore, or hag, but sometimes they are known as the Master, Light Bearer, Psychopomp, Key Holder. (Sometimes they are both loved and feared, for the Mysteries that illuminate and set the soul aflame can also consume one with madness if not grounded and tempered.) Hekate and Hermes both held this role in ancient Greece.  In Africa (and African-diaspora) religions we see Legba/Elegua (and several others) as well as Pomba Gira.  Odin was honored at crossroads in parts of Denmark and elsewhere in the Norse world.

Folklore holds that rulers, dancers, musicians, artists, and merchants — just to name a few — have all made deals with the Devil at the crossroads to increase their talents, fame, power, and fortune. Perhaps the truer tale is that these intrepid (or desperate) seekers quested for mastery of their natural gifts. They may have come away changed by their initiation, startled by the Keeper they encountered there, but their work was fueled by Cunning Fire  after they had gone down to those crossroads.