Widdershins, Sunwise, and Calling the Circle

Because we have set out to make this a family tradition, sometimes our daughter comes to us with questions that we have taken for granted.  Earlier this week she asked us about what widdershins means and what it is used for.


Widdershins (sometimes withershins, widershins or widderschynnes) means to take a course opposite the apparent motion of the sun, to go anticlockwise or lefthandwise, or to circle an object by always keeping it on the left.[1] The Oxford English Dictionary's entry cites the earliest uses of the word from 1513, where it was found in the phrase "widdersyns start my hair", i.e. my hair stood on end.

The use of the word also means "in a direction opposite to the usual", and in a direction contrary to the apparent course of the sun. It is cognate with the German language widersinnig, i.e., "against" + "sense". The term "widdershins" was especially common in Lowland Scots.

~Wikipedia "Widdershins"
There are many groups that choose to work either exclusively widdershins -- especially those that tread the mill -- or its opposite, sunwise (also known as deosil).


In Scottish folklore, Sunwise or Sunward was considered the “prosperous course”, turning from east to west in the direction of the sun. The opposite course was known in Scotland as widdershins (Lowland Scots), or tuathal (Scottish Gaelic, lit. northerly), and would have been counterclockwise. It is perhaps no coincidence that, in the Northern Hemisphere, "sunwise" and "clockwise" run in the same direction. This is probably because of the use of the sun as a timekeeper on sundials etc., whose features were in turn transferred to clock faces themselves. Another influence may also have been the right-handed bias in many human cultures.

This is descriptive of the ceremony observed by the druids, of walking round their temples by the south, in the course of their directions, always keeping their temples on their right. This course (deiseal) was deemed propitious, the contrary course, tuathal, fatal, or at least, unpropitious. From this ancient superstition are derived several Gaelic customs which were still observed around the turn of the twentieth century, such as drinking over the left thumb, as Toland expresses it, or according to the course of the sun. Wicca uses the idiosyncratic spelling deosil - however, this is not used in any of the three Gaelic languages. 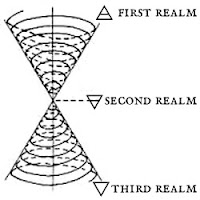 We choose to tread the mill in both directions, depending on the nature of the rite.  We use the mill to lead us either up and out or down and within.  When treading sunwise, the energy rises upward spiraling us into the first realm, Ceugent. Treading widdershins brings the energy down into the land where we can access the third realm, Abred.  Neither of these movements is more desirable than the other, they are both as necessary and as benign as the positive and negative poles of a magnet.

So, when casting the caim by calling in the gates and castles of the circle which way direction do we choose?  Many traditions call sunwise and dismiss widdershins, but we work the circle in a completely different pattern.

When casting the caim we call inward towards the Spiral Castle.  We call the gates and castles two-by-two to create the old straight track that joins each gate to the center like the spokes of a wheel.

First we call to the realms, Ceugent above, Gwyned between, and Abred below.  This is the first circle. 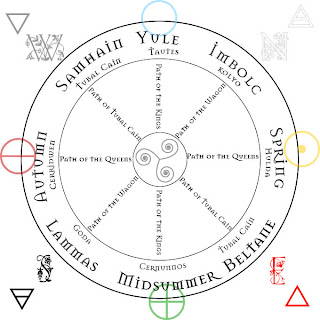 Next we call by honoring the station that the Spiral Castle is turned to in the year wheel.  Therefore, since it is now March as I write this, and the Spiral Castle is open to face the Spring Equinox, we would begin by calling the Castle of Revelry, acknowledging its treasure, the Golden Lantern, and its sovereign, the Golden Queen.  We would then call along the Path of the Queens across to the Castle Perilous, home of the Silver Queen and the Holy Grail.  We continue by calling along the Path of the Kings to the Stone Castle and the Glass Castle.  Each of these paths meet in the center at the stang, or Spiral Castle.  This is the second circle.

The third circle is that of the gates, or Airts, where we call to the four elemental quarters and the Great Gods of our Tradition.  We call to the White Goddess and the Black Goddess through the South and North gates, homes of Earth and Air.  This is the Path of the Rose-Painted Wagon, which is a mystery.

We then call along the Path of the Sun, East to West, dawn to twilight, the road of Tubal Cain.  In the East shines Lucifer/Malek Taus/Azazel, light-bringer, lord of creation and inspiration.  Tubal Cain stokes the forge and the sun rises, the cunning fire rises, the light of reason rises.  Fire blazes forth from the Eastern gate, filling us with warmth and force of Will.

We echo that calling to Tubal Cain in the West, Lord of the quench tank.  Here Tubal Cain is the Dark Lord of Death and Magic, who peacefully shepherds those beyond the veil, and raucously leads out the Wild Hunt.  He comes from the Western gate, place of Water, land of the setting sun, place of the Blessed Isle of Avalon.  Here lies the weapon of the helm, the mask, the Helkapp by which Death comes silent and invisible. 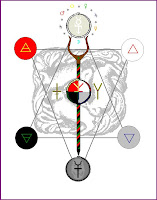 Thus is the third circle cast.

Together the three circles, sending out rays in all directions: above and below, north and south, east and west, and all places between, build the Spiral Castle, the stang which we use as a gandreigh to travel out to each of the realms, and all of the places between.

By treading the mill sunwise or widdershins we can travel out or send forth energy to wherever and whenever we choose, guarded by our Gods, and the Watchtowers of legend.
Posted by Natalie at 1:59 PM