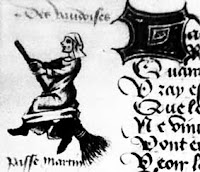 "Emen hetan and Ab hur, ab hus seem to be calls; as does Horse and hattock, horse and go! Horse and pellatis, ho, ho, ho!"

"I haid a little horse, and wold say, "Horse And Hattock, In The Divellis Name!" And than ve vold flie away, quhair ve vold, be ewin as strawes wold fiie wpon an hie-way. We will flie lyk strawes quhan we pleas; wild-strawes and corne-strawes wilbe horses to ws, an ve put thaim betwixt our foot, and say, "Horse And Hattock, In The Divellis name" An quhan any fies thes strawes in a whirlewind, and doe not sanctifie them selues, we may shoot them dead at own pleasour. Any that ar shot be vs, their sowell will goe to Hevin, bot ther bodies remains with ws, and will flie as horsis to ws, als small as strawes. I was in the Downie-hillis, and got meat ther from The Qwein Of Fearrie, mor than I could eat. The Qwein of Fearrie is brawlie clothed in whyt linens, and in whyt and browne cloathes, &c; and The King Of Fearrie is a braw man, weill favoured, and broad faced,  Ther wes elf-bullis rowtting and skoylling wp and downe thair, and affrighted me."

There is a piece of Scottish folklore concerning a Laird Duffus who was walking in his fields one day when he heard a series of voices in the wind crying forth "Horse and Hattock!" Curious, he too shouted "Horse and Hattock!" and he was immediately lifted into the air.  He flew to a dark room filled with fairies. They danced, sang, ate, and caroused all night until at last Laird Duffus fell asleep.  The next morning the Laird found that he had been sleeping in the cellars of the King of France!  He was clutching a finely wrought silver cup, which he attempted to return to the French King.  The King, however had never seen the cup, and allowed Laird Duffus to keep the cup, saying it must be fairy work.  The cup was passed through the family for many generations, and was always known as "the fairy cup".

The "Hattock" in "Horse and Hattock" seems to mean hat or cap, and the phrase itself is similar to saying "Hold on to your hats!"

Variants on the phrase include "Hupp, horse and handcocks!" and "Up hors, up hedik!"  In addition to flying on broomsticks, or simply levitating through the air, Horse and Hattock is said to be able to transform ragwort into a fine steed.  Indeed, "as rank a witch as ever rode on ragwort" was a common phrase among the Scottish peasantry.

In folklore fairies fly through the air on horses, or by gossamer wing.  Horse and Hattock seems to be the standard Scottish enchantment for joining them on their flights, and those that fly with the fey are surely witches.
Posted by Natalie at 10:35 PM