In our tradition we divide the year not only by eight solar and agricultural holidays, but also by the Kalends. We celebrate twelve months of the year by the common calendar, plus a special thirteenth month for Samhain.  These month cycles are associated with different totemic spirits. Each month is assigned an animal, a bird (or other flying creature), and a tree. Samhain's totems are Toad, Elder, and Crane. 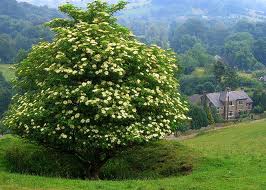 The Elder tree is associated with death and rebirth. The 13th month is a time of endings and balances, and the Elder is a tree of balance. This tree is never called into the compass, but it is recognized where it stands (outside the sacred space). The Elder is usually found at the opening to barrows and passages to the Underworld.
This is a tree of the Faery. If one cuts down this tree without seeking the will of the Tree Spirits and of the Faery, a blight or curse will fall on that person. Her wood is never burned as it is considered bad luck to do so. This injunction is remembered in one of the couplets from the modern Wiccan or Witches' Rede: "Elder be the Lady's tree. Burn it not, or cursed you'll be."

In some parts of the world the Elder is considered as a protection against snakes and thieves.
The Elder protects one from harm and psychic attack. It represents change and transition. The elemental association for the Elder is water, and its gender association is feminine.
The Elder is sacred to the various guardians of crossing over from one life to death and from death back into life. 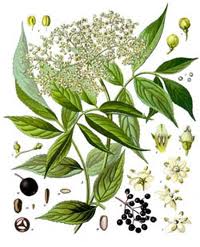