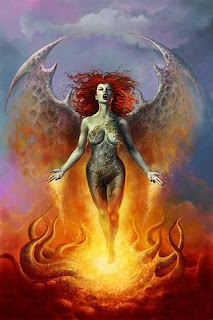 Lilith is a Hebrew name for a figure in Jewish mythology who is generally thought to be in part derived from a class of female demons called Lilitu in Mesopotamian texts. The Gilgamesh appendix and the Arslan Tash amulets are the two sources used to connect the Jewish Lilith to an Akkadian Lilitu. The Hebrew term Lilith first occurs in Isaiah 34:14.

In Jewish folklore, from the 8th–10th century work The Alphabet of Ben Sira onwards, Lilith becomes Adam's first wife, who was created at the same time and from the same earth as Adam. This contrasts with Eve, who was created from one of Adam's ribs. Lilith’s legend was greatly developed during the Middle Ages. In a 13th Century writing, Lilith left Adam after she refused to become subservient to him and then would not return to the Garden of Eden after she mated with archangel Samael. She was said to have spoken the secret Holy name of God and transformed herself into an owl to fly from Eden. The name "Lilith" means "screech owl".  In some medieval folklore, Lilith does return to Eden as a serpent. She then offers forth the fruit of the Tree of Knowledge to Eve, making her a kind of proto-Sophia or wisdom Goddess.

Charles Leland associated Aradia with Lilith. Aradia, says Leland, is Herodias, who was regarded in stregheria folklore as being associated with Diana as chief of the witches. Leland further notes that Herodias is a name that comes from West Asia, where it denoted an early form of Lilith.

In some Traditional covens, Lilith is viewed as the embodiment of the Witches' Goddess. She was said to have embodied herself in the form of Na'amah, the sister of Tubal Cain, and is therefore one of the original sources of Witchblood. Some see this Lilith as the Queen of the Fairies and Grandmother to them as well.

One of the old names for the moon is Lilith’s Lantern, as it was said to be the light that Witches met by. Lilith is associated with the moon, owls, and serpents.

Prayer Unto the Queen of Succubi
by Andrew Chumbly

I bless the Waters of Desire
I drink the Fountain White.
I call thee Mother Lilith
Harlot of the Night.

Mine are the Blossoms of Rousing
To Bewitch the Moon-Feast round;
Unto me thy Daughters
Ye Nymphs of Paradise ground.

I bless the Waters of Desire
I drink the Fountain White.
I call thee Mother Lilith
Harlot of the Night.

By the Mystery of the Bright Moon
And the Vessel of Quickening Fire
Thy Power is Made Flesh.