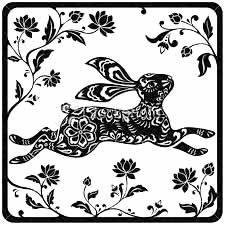 The Spring Equinox is one of the four solar Sabbats. Equi + nox derives from a combination of Latin words meaning “equal" + “night." The two Equinoxes are the only days of the year when both day and night are of equal duration. The Northern Hemisphere celebrates Spring Equinox in March.

Modern calendars state that spring begins on the equinox. According to the old folk calendar, spring is at its peak at the this time.  Imbolc, the end of winter, is past, while Beltane, the beginning of summer, awaits in the future.

The Spring Equinox is a marvelous and muddy time of year.  It is the perfect time to perform the magic of planting.  There are few miracles in the world to rival the bursting forth of fresh green life and beautiful spring flowers from the damp soil that has lied dormant and seemingly dead all winter.  Sap rises in the trees, giving a blood red color to the new growth of saplings, and animals emerge from their winter dens, ready to find mates.  The world seems new and reborn, and indeed, these are the themes of this Sabbat.

The zodiacal calendar year begins anew with this Sabbat, with the sun at zero degrees Aries marking the Equinox itself.  This is also traditionally the time of year when dying-resurrecting vegetation Gods are risen, such as Attis, Osiris, and Jesus.

Ostara is the popular Neo-Pagan name for this Sabbat, and it derives its origin from a Germanic Goddess of Springtime.  She in turn took her name from the root Eostre, which is where we get the words east, estrogen, and Easter.  Her symbols of worship include the rabbits and eggs, which were painted in the colors of the newly blossomed flowers that sprung up in her footsteps.  Ostara/Eostre was literally the “eastern star”, or Venus.  She  ruled the fecundity of life that bursts forth at Spring and is related to Middle Eastern Venusian Goddesses such as Ishtar, Inanna, and Esther.

Egg decorating, hunting, gifting, and begging are all traditionally associated with the Spring Equinox.  It was once common in England for young men to blacken their faces and go door to door singing songs about springtime in exchange for a colored egg, a hot crossed bun, or a bit of milk punch.

The hot crossed bun has little to do with the Christian symbolism of the cross, and more to do with the equal-armed cross marking the equinox when days and nights were equal.  Later on the crossed bun took on the same folk magical properties that the Host of the Good Friday Mass would, with the ability to heal the sick and bless anyone who partook of the Paschal treat.  It is also thought that the hot cross bun took on some of the symbolism of the eucharist, itself a wafer marked with a cross.  There are many early modern English folk spells (pre- and post-Reformation) that involve Cunning Folk using the host (presumably sneaked out under the tongue during Mass) to banish sickness and bring healing.

In our tradition Spring Equinox is one of the time of year when  we pay homage to the Golden Queen.  This is Hulda in her fiery aspect, Brigid as the Lady of fire and Spring, and Aphrodite as the Golden Goddess.  She is the herald of the waxing sunlight.

The Spiral Castle is turned to face the northeast castle, the Castle of Revelry, whose treasure is the golden lantern.  The golden lantern is a beacon to the initiate on the path, the lantern of the Hermit, and it hold the inspirational light of Awen within it. The Castle of Revelry sits on an island in the lake of fire.  It is the hall of Valhalla and is filled with heroes of myth and legend.

The Rambles of Spring

I've a fine felt hat and a strong pair of brouges
I have rosin in me pocket for me bow
and my fiddle strings are new and I've learned a tune or two
So I'm well prepared to ramble, I must go

I'm as happy as a king, when I catch a breath of Spring
and the grass is turning green as winter ends
and the Geese are on the wing, as the Thrushes start to sing
and I'm headed down the road to see my friends