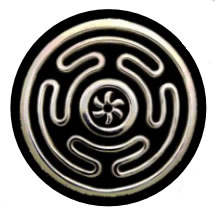 Hecate or Hekate is an ancient goddess, most often shown holding two torches or a key and in later periods depicted in triple form. She is variously associated with crossroads, entrance-ways, fire, light, the Moon, magic, witchcraft, knowledge of herbs and poisonous plants, necromancy, and sorcery. She has rulership over earth, sea and  sky, as well as a more universal role as Savior (Soteira), Mother of Angels and the Cosmic World Soul.

Hecate is also one of the ‘patron' goddesses of many witches, who in some traditions identify her with the Triple Goddess, for Hecate has three faces, or phases. Her role as a tripartite goddess, which many modern-day Wiccans associate with the concept of ‘the Maiden, the Mother and the Crone', was made popular in modern times by writers such as Robert Graves in The White Goddess.

Historical depictions and descriptions show her facing in three different directions, a clear reference to the tripartite nature of this ancient Goddess.


Hecate was associated with borders, city walls, doorways, crossroads and, by extension, with realms outside or beyond the world of the living. She appears to have been particularly associated with being ‘between' and hence is frequently characterized as a “liminal" goddess. Hecate was also associated with plant lore and the concoction of medicines and poisons. In particular she was thought to give instruction in these closely related arts. Medea was said to be taught by Hecate.


Hecate has survived in folklore as a ‘hag' figure associated with witchcraft. Scholars note that Hecate, conflated with the figure of Diana, appears in late antiquity and in the early medieval period as part of an “emerging legend complex" associated with gatherings of women, the moon, and witchcraft that eventually became established in the area of Northern Italy, southern Germany, and the western Balkans.