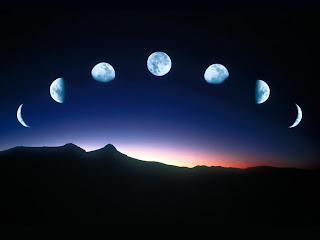 Where is the Moon?

Why is the moon sometimes visible during the day? And why does the moon sometimes rise very late at night? The answers lie in what phase the moon is in, which reflects the angle between the sun and moon as seen from earth. For each of the eight moon phases, the angle between the sun and moon progresses in 45 degree increments. Each phase lasts approximately 3-4 days of the moon's entire 29 1/2 day cycle.

The new moon (or dark moon) rises at sunrise and sets at sunset. Astrologically, the sun and the moon are in conjunction. Because the sun's light overpowers the nearby moon in the day, and the moon is on the other side of the earth with the sun at night, she is not visible in the sky at all.

The crescent moon (or waxing crescent moon) rises midmorning and sets after sunset. She is the first visible sliver of moon, seen in the western sky in the late afternoon and early evening.

The first quarter moon (or waxing half moon) rises around noon and sets around midnight. Astrologically, the moon is square to the sun. She is visible from afternoon, when she is high in the eastern sky, until she sets in the west.

The gibbous moon rises mid-afternoon and sets before dawn. She is the bulging moon getting ready to be full, visible soon after she rises until she sets.

The full moon rises at sunset and sets at sunrise. Astrologically, the sun and moon are in opposition (i.e., opposite each other in the sky and in opposite signs of the zodiac). She is visible all night long, from moonrise to moonset.

The disseminating moon is the waning full moon getting visibly smaller. She rises mid-evening and sets midmorning. She is visible from the time she rises almost until she sets.

The last quarter moon or waning half moon) rises around midnight and sets around noon. Astrologically, the moon is square to the sun. She is visible from the time she rises until midmorning, when she is high in the western sky.

The balsamic moon (or waning crescent moon) rises before dawn and sets mid-afternoon. She is the last sliver of moon, seen in the eastern sky in the very early morning and late dawn.

The full moon has been associated with magic and witches for millennia.  The ancient Roman writer, Horace, made a reference to a witch drawing the moon down out of the sky.


Horace (Epode 17)---says the Witch Canidia "... must I, who can move waxen images and draw down the moon from the sky by my spells, who can raise the vaporous dead, and mix a draught of love lament the effect of my art, availing nothing upon you?"

Margot Adler's Drawing Down the Moon, has a picture from a Greek vase, supposedly from the
second century BCE.  This depiction has some Greek lettering near both of the figures. The word on the left is translated as, "beautiful." The words on the right apparently translates as, "who [are] of the moon mistress."

Werewolves famously shape-shift during the full moon, and the cult of the werewolf has ties to the ancient witch-cult. Essentially, the full moon was a time to use the moon's power to enhance shamanic shape-shifting work.

In Aradia, The Gospel of the Witches Aradia, the holy daughter of Diana, left these instructions to her followers:


Whenever you have need of anything, once in the month when the Moon is full, then shall you come together at some deserted place, or where there are woods, and give worship to She who is Queen of all Witches. Come all together inside a circle, and secrets that are as yet unknown shall be revealed.

The traditional use of the phases of the moon for magic are as follows:
13 Moons of the Year 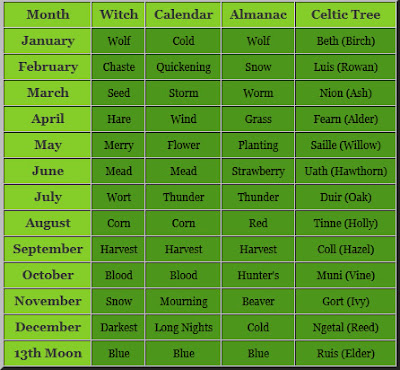 The Moon names of our tradition are based on each of the sources listed above, along with a comparison to the totems and energies we honor at each month.  Our lunar names are as follows: