The Sarf Ruth is the Cornish term for "Fire in the Land".  It is the dragon energy in the land -- also known as ley lines -- that flow to and from sacred places such as wells, crossroads, graveyards, sacred trees, etc.

This "dragon energy" is drawn up from ley lines by use of the stang, which in Cornish tradition is called a gwelen.  Walking the ley lines is one way to walk the Crooked (serpentine) Path.

Although the Sarf Ruth is well documented in England (mostly through the work of Alfred Watkins), it is a phenomenon that spans the globe, and many cultures have beliefs in energy in the land.  Often old sacred sites will tend to line up along a "straight track" on a map. Watkins developed a theory that these alignments were created for ease of overland trekking by line of sight navigation during neolithic times and had persisted in the landscape over millennia. 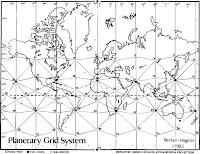 Dragons and serpents have long been associated with this energy, from Merlin's red and white dragons battling underground, to the eastern concept of kundalini.

Local to us (here in Southern Indiana) are two notable dragon lines.  One is the Lost River, a feature unique to our limestone-laden hills.  The second is Indiana State Highway 150, also known as the Buffalo Trace.  The Buffalo Trace was originally formed by millions of migrating bison. It later became an important land route for settlers in Indiana.

These two land features converge in an valley to the north of the small town of Hillham, Indiana.  In one of these valleys is Our Haven Nature Sanctuary, where Laurelei and I attend many summer festivals.  The energy there is intense and very healing.  I didn't realize that these two ley lines met near Our Haven until I was writing this piece.  I hope that my Our Haven family is as tickled as I am by this information.
Posted by Natalie at 11:23 PM