Ladders, Rosaries, and a bit on Weaving

While the season is still under the auspices of the Black Goddess (herself a weaver of fate and magic), I thought I might like to write about a version of weaving magic that is rather central to traditional Witchcraft. I'm referring to the production of witches' ladders.

The simplest sort of ladder is a single string, thread or cord into which the Witch ties a series of knots. The magic of the Witch -- her power and intent -- is stored in each knot and can be unleashed at a later time.

The exact same type of ladder can be used as a devotional tool, a sort of Witch's rosary, in which she plans the steps on the ladder to lead to a devotional goal.

Of course, witchcraft isn't at all about doing things in the simplest manner, and we ARE a crafty lot. We enjoy weaving together numeric and color symbolism, and so our ladders tend to have more than one strand -- and often more than one color -- braided and knotted together. We include charms, beads, bone, feathers, and more to add oomph to our magic. 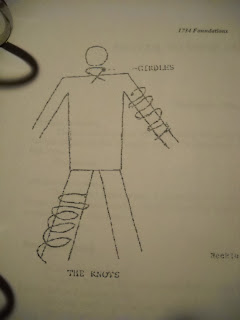 To the right is a picture of a drawing that was included in the "1734 Letters" that I printed from Joe Wilson's website in early 2000. While all of the writing is still available, I am a little dismayed that most of the pictures have entirely disappeared from the Internet. (The text at the bottom of each page clearly said, "Not to be sold under any circumstances for any purpose. Must be freely distributed.")

At any rate, this picture (labeled "THE KNOTS") shows three possible placements for "GIRDLES" -- or ladders. In Robert Cochrane's writing "On Cords," he describes the use of both devotional and magical cords:

"When worked up properly they should contain many different parts--herbs, feathers and impedimenta of the particular  harm. They are generally referred to in the trade as "ladders," or in some cases as "garlands," and have much the same meaning as the three crosses. That is they can contain three blessings, three curses, or three wishes. A witch also possesses a devotional ladder, by which she may climb to meditational heights, knotted to similar pattern as the Catholic rosary."

When making a ladder, you will typically work from the outsides toward the middle. So, your first knot is on one end of the cord, your second knot is on the other end, and your third knot is in the middle. If you have more than three knots (as in the rhyme above), you place new knots between established ones, still alternating sides. So, for instance, the fourth knot would be between knots 1 and 3. In this way, the placement of knots becomes an act of weaving, as well.