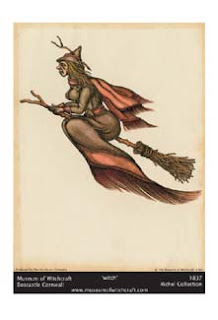 A gandreigh is a riding pole used to fly out astrally to access different realms.  The gandreigh can be a broom, a staff, a stang, or even a wand that the rider uses to send forth a fetch for the astral body to inhabit.


"The stick is the Gandra which is both the magic wand and stick that straddle the Witch of the North. It is a variant of the classic broom or forked stick of witches in Europe. The armies of the night-flying creatures on sticks are called "the gandreigh" in Old Norse. This applies to the flight of witches and the dead ghost hunting Wild."

The gandreigh is not used for physical flight through consensus reality, rather it acts as a world tree by which we can access levels of being through "flying" (or climbing) up and down the pole.

In our tradition the world tree is symbolized by the Spiral Castle, although the stang, staff, or broom is a personal tool which acts as an expression of this energy.  It is the witches most personal tool and is usually destroyed upon a witch's death or given as a kuthun.
Posted by Natalie at 3:52 PM