In our tradition we divide the year not only by eight solar and agricultural holidays, but also by the Kalends. We celebrate twelve months of the year by the common calendar, plus a special thirteenth month for Samhain.  These month cycles are associated with different totemic spirits. Each month is assigned an animal, a bird (or other flying creature), and a tree. January's totems are Wolf, Blackthorn, and Blackbird. 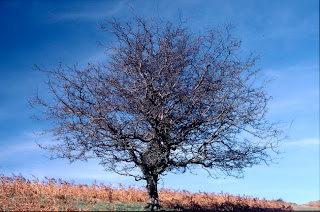 The Blackthorn is a tree of winter.  The fruits of the tree, known as sloes, ripen and sweeten only after the first frost.  Sloe gin is made from these fruits.  A cold spring is traditionally known as a blackthorn winter, as the blackthorn often bears its white blossoms while winter's chill still hangs in the air.

The blackthorn has vicious thorns that can cause painful infections, and forms dense thickets when left to spread on its own.  It has tough dark black bark, hence its name.

Blackthorn's Gaelic name "straif" has connections with the English word strife.  Its thorns as sometimes used in witchcraft as "pins" to pierce wax poppets.  Some legends attest that the witches mark was made upon the flesh of a witch with a blackthorn thorn. 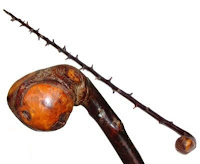 Blackthorn's wood is used in the creation of the Irish cudgel or shillelagh, which is an old traditional tool of the male leader of a coven.  Blackthorn staves and wands are used in blasting/cursing magic.

Charm of the Thorn


As a storm of tangl'd Briars
I cast forth the spines of torment:
Byt weave of thorns I bar the Way!
Ye Strength of the Nail of the Cross,
All spirits foul be fix'd upon Thee.
Let Ghost and Flesh twain be punctur'd
And Darkness fall -- for thou Art bound!

~Viridarium Umbris: The Pleasure Garden of Shadow by Daniel A. Schulke
Posted by Natalie at 10:59 PM