The Castles, the Druid's Egg and the Glass Sphere 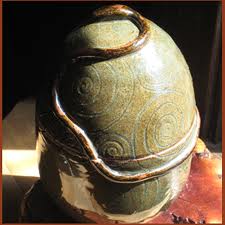 Glaux's Summer Solstice post sparked an interesting dinner table conversation at our house. This is often how magic and the Craft work for us. It is very much a family affair -- and very much a crooked and winding path. Nothing is simple and direct. Neither of us sees the whole picture for what it is. One of us has an insight, and the other rounds it out.

In Tuesday's post, Glaux wrote about the way in which snakes were believed to curl themselves into balls and harden into stone or glass. What she left unsaid in the post is something that excited us both at table. You see, one of the parts of American Folkloric Witchcraft as it is coming to us has to do with a system of Castles that are associated with the four solar holidays of the year -- the equinoxes and solstices. Robert Cochrane writes a bit about a Castle structure in his letters, and it is something that resounded very significantly with us. My former HPS, who had studied at one time with a daughter coven in the Ancient Keltic Church, had also taught me and my covenmates a bit about a magical castle (but truly, only enough to whet our appetites and then leave us wanting more).

Most of what Glaux and I have come to understand about the Castles, we have come to via inspiration, research and luck. We work with five Castles, one in each cross-quarter of the compass and one at its center. The four at the cross-quarters are kept by two kings and two queens who each guard a treasure within their walls.

There is a great deal of symbolism worked into the information in the paragraph above. We'll be getting into it in entries to follow, and with just this in hand, you have a lot that you can parse out. (You can also look to this graphic -- which graces our blog -- for the treasure's symbols. The triskele in the center represents the Spiral Castle.) 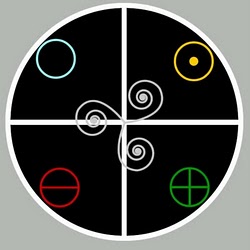 What had Glaux and I excited was the fact that the snakes didn't turn into Druids' eggs only on Summer Solstice. This phenomenon happened at BOTH solstices. And the snakes were described as both stones and glass bubbles. Well! What do we have as our treasures at the solstices? A stone bowl (which we describe as being made of stone and being filled with stones) and a glass orb (or bubble).

The full magic of the Castles is still elusive, and we know that we are questing (and always will be) to understand it. But confirmations that our path is true -- albeit crooked -- make us two very happy Witches.
Posted by Laurelei at 10:21 PM