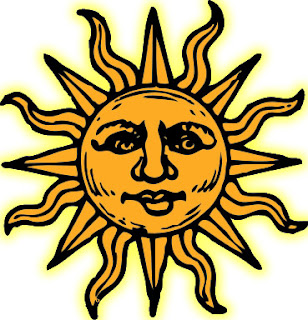 Sol + stice derives from a combination of Latin words meaning "sun" + "to stand still." As the days lengthen, the sun rises higher and higher until it seems to stand still in the sky.

As a major celestial event, the Summer Solstice results in the longest day and the shortest night of the year. The Northern Hemisphere celebrates in June, but the people on the Southern half of the earth have their longest summer day in December.

Modern calendars state that summer begins on the solstice. According to the old folk calendar, summer begins on Beltane (May 1) and ends on Lammas (August 1st), with the summer solstice, midway between the two, marking Midsummer. This makes more logical sense than suggesting that summer begins on the day when the sun's power begins to wane and the days grow shorter. The day is also referred to as St. John's Day, after St. John the Baptist. Other names include Alban Heflin, Alben Heruin, All-couples day, Feast of Epona, Feill-Sheathain, 'Night of the Verbena, Gathering Day, Johannistag, Litha, Sonnwend, Thing-Tide, La Festa dell'Estate, Festa delle Erbe, and Vestalia.

In England, it was the ancient custom on St. John's Eve to light large bonfires after sundown, which served the double purpose of providing light to the revelers and warding off evil spirits. This was known as setting the watch. People often jumped through the fires for good luck. In addition to these fires, the streets were lined with lanterns, and people carried cressets (pivoted lanterns atop poles) as they wandered from one bonfire to another. These wandering, garland-bedecked bands were called a marching watch. Often they were attended by morris dancers. Just as May Day was a time to renew the boundary on one's own property, so Midsummer's Eve was a time to ward the boundary of the city.

Customs surrounding St. John's Eve are many and varied. At the very least, most young folk plan to stay up throughout the whole of this shortest night. Certain courageous souls might spend the night keeping watch in the center of a circle of standing stones. To do so would certainly result in either death, madness, or (hopefully) the power of inspiration to become a great poet or bard. This was also the night when the serpents of the island would roll themselves into a hissing, writhing ball in order to engender the glain, also called the serpent's egg, snake stone, or Druid's egg. Anyone in possession of this hard glass bubble would wield incredible magical powers. Even Merlin went in search of it, according to one ancient Welsh story.

Snakes were not the only creatures active on Midsummer's Eve. According to British folklore the fey especially enjoyed a riding on such a fine summer's night. In order to see them, you had to gather fern seed at the stroke of midnight and rub it onto your eyelids. But be sure to carry a little bit of rue in your pocket, or you might well be pixie-led. Or, failing the rue, you might simply turn your jacket inside-out, which should keep you from harm's way. But if even this fails, you must seek out one of the ley lines, the old straight tracks, and stay upon it to your destination. This will keep you safe from any malevolent power, as will crossing a stream of running water.

In our tradition we use this time to fly to the Castle of Stone where we may honor and gain wisdom from the Oak King.  One way to achieve this vision it through a guided meditation, such as is presented here.

You can learn more about our tradition's wheel of the year through this link.
Posted by Natalie at 12:09 AM