Entheogen is a Greek derived word that means "generating the divine within." An entheogen, therefore, is a psychoactive substance that is used in a religious, spiritual or shamanic context. Traditional Witches have used entheogens of several types for centuries, as recorded in the lore of mythology, in the records of the trials and persecutions, and in the regional indigenous shamanic practices  that have been assimilated into the Craft various locales.

Among the most commonly used and widely known entheogens in European and American Witchcraft practice are Sabbat Wine and Flying Ointment. These are the two on which we'll focus our attentions in this exploration. (While there are many and varied regional entheogens that have found their way into Craft practice in some form or another, they are just too numerous for me to mention here. Furthermore, I really don't feel qualified to speak on them since I'm very inexperienced with them.)

Wine, just as it is, constitutes a powerful entheogen. The Dying and Resurrected God is embodied int he wine in the form of Dionysos -- and in Jesus, for that matter, whose symbolism and mythology associates him with the wine. Dionysos, though, is the "Twice Born" God of the Vine, and his cup is the offering of ecstasy and madness. "I am the vine," he says, and he offers insight into death and rebirth, despair and joy.

Many Witches drink wine -- either a little or a lot -- as a part of their Sabbat rites no matter what. In American Folkloric Witchcraft, we include Sabbat Wine for two separate and distinct purposes -- and the wine is different depending on that purpose.

If we are celebrating the Housle as we usually do within the regular course of ritual, we will sacrifice a cup of red wine. It is the shed blood of the Red Meal that is the Housle.  In this instance, we don't add anything to the wine because we don't need any additional entheogenic effect. 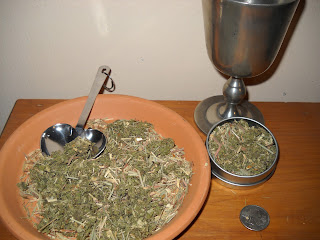 If, however, we are doing trance work, flying out, seiding, or otherwise seeking an altered state of consciousness, we might prepare our special Sabbat Wine (vinum sabbati). We also prepare this Sabbat Wine for initiations. In our case, the vinum sabbati is a local sweet red wine (Oliver Soft Red) in which mugwort and lemongrass have been mulled. After straining the herbs, we add local honey to sweeten the mix and cut the bitterness of the mugwort. Both mugwort and lemongrass have gentle psychoactive properties.

It's interesting to note that the term "vinum sabbati" has actually been associated with flying ointment, or the witches' salve, which is the other major entheogen of witchcraft. In fact, Nigel Jackson said flying ointment was "the black wine of owls."

This greasy, trance-inducing substance was traditionally made of hallucinogenic (and often fatal) herbs that had been boiled in pig fat and then strained. It was called "green salve" or "witches' ointment" and it some of the stock ingredients (solinicaeds) caused a "flying" sensation as the hallucination began -- hence the popular image of the flying witch. 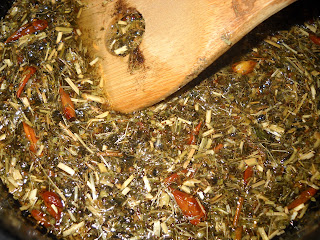 Great care had to be taken in preparing this ointment, though. Traditional ingredients included such components as henbane, monkshood, deadly nightshade, belladonna, hemlock, and mandrake -- all lethal in too large a dose. In some cases, that does could be quite small. One witch learned from another how to properly prepare the salve and how to administer it to herself, and I'm sure it was still "At your own risk, sister."

I'm simply not a brave enough woman to fool around with these poisons. So, I looked to some of the other traditional ingredients in the old flying ointments -- the ingredients that wouldn't cause a person to exsanguinate from their skin, for example. (Belladonna does that. It's the key ingredient in rat poison.) Cinquefoil and Balm of Gilead made the cut from the old recipes. Then, I gathered together herbs known for trance and vision work -- many of which I'd already used successfully. Mugwort, Dittany of Crete, lemongrass, clary sage, wormwood, rue.

I use vegetable shortening as the fat, and I add benzoin powder and vitamin E for preservation. None of the last is traditional in any way, but I want it to last and not get funky.

Our coven uses this mix a fair amount. We fly out at just about every Sabbat. Does my blend make you trip? No. Does it help you fly? Oh yeah. Everybody whose used it add reported back has shared positive results. At this point, that's been a fair few people, since we do sell this in our Etsy shop.
Posted by Laurelei at 3:56 PM