In our tradition, we divide the year not only by eight solar and agricultural holidays, but also by the Kalends. We celebrate twelve months of the year by the common calendar, plus a special thirteenth month for Samhain.  These month cycles are associated with different totemic spirits. Each month is assigned an animal, a bird (or other flying creature), and a tree. October's totems are Salmon, Hazel, and Lapwing. 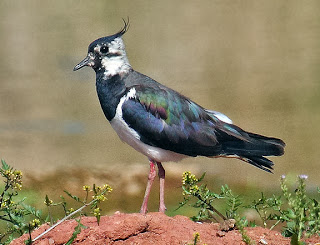 The lapwing is one of the three guardian animals discussed by Robert Graves in his book The White Goddess.  (The other two are Dog and Roebuck, both of which have a place in our totemic wheel). The lapwing guards the Mysteries of the Wise, he says, by "disguising the Truth." She does this by feigning injury to make herself appear helpless to predators who have come to close to her nest. This nest is on the ground in the spring, with her hatchlings inside. She flops and flails and flies in little spurts, all the time leading the predator away from her young. When she has gone far enough, she abandons the rouse and flies away.

The Greeks used the phrase "deceitful as a lapwing" because of this same behavior. Framed positively, though, we see the lapwing's great resourcefulness and cleverness.

Because Lapwing's nest rests on the ground in the spring, hares have been known to sit in them, looking like they are hatching eggs (which is where the combined association of bunnies and eggs come from for spring fertility celebrations). It is actually said in myth that the Teutonic Goddess Ostara transformed a Lapwing into a Hare. The Hare, of course, is already associated with shape-shifting, and this myth shows that Lapwing is also a shape-shifter (further adding to her ability to "disguise the Truth").

She is a Guardian of the Mysteries, and she teaches us to look beyond the superficial details, to ignore appearance and aim instead for reality.
Posted by Laurelei at 3:03 PM