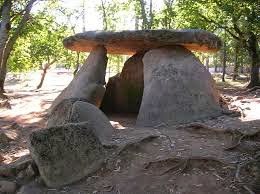 The Western Gate – Airt of Water

You can visualize the Gates (the portals to each of the four cardinal directions) in anyway you like; but I'm particularly fond of viewing the West Gate as a three-legged dolmen. A dolmen constructed this way was seen as a portal to the Underworld, the place of the Dead.

The Wetsern Gate is very much associated with the Dead, as it is the direction in which many ancient cultures (including the ones informing this Tradition) believe that spirits travel after death. Very often, this imagery is connected to a final journey of the soul across a body of water -- crossing the ninth wave and leaving behind the mortal realm, consciousness, and consensus reality.

The West is also a place of dreams, emotion, and deep knowing. It is twilight, the liminal space between waking and sleeping. It is where the sun sets, and it is thus the Western point of the Red Thread (in this case, the path of the Sun) that connects the bright half of the Witch Father with his darker aspect.

In the West, Qayin is the keeper of the quench tank, the waters that temper the glowing creations of the forge. He is the Lord of Death, keeper and guardian of the Mysteries. His name is Azazel here, the scapegoat and the one who takes the sacrifice. He is the one who wanders alone -- a reminder that death is an individual journey.

On our Year Wheel, the Western Gate is open and most easily accessed at Samhain, and the three totems that sit here are all intimately linked with Death and with blasting magic. It is said that the Elder tree brings actual, physical death within the circle of those who summon it. (This lore is carried even into popular culture, where the most powerful wand in JK Rowling's created universe is the Elder Wand, the Death Stick, the wand of Death himself.) The "crane stance" is a well-known blasting practice among traditional witches, as is the power of the Toad Bone.

This is a time for honoring ancestors, exploring the Mysteries of Death, and connecting with our own dark selves.