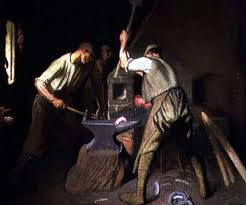 There are several types of stones that are important to Cunning Folk. With Tubal Cain being such a central figure within the lines of the Craft that have influenced this Tradition, however, it is no surprise that the Oath Stone upon which we take our vows and form our sacred blood bonds is his anvil.

I feel that it is most honest here to point out that this point of symbolism comes less from specific lore or myth as handed down from others, and more from mythopoesis -- that poetic sense of symbolic elements fitting together and clicking into place.

This is a piece of American Folkloric Witchcraft that came first from the Clan of the Laughing Dragon, the coven I (Laurelei) was trained in as a young Witch. There, the anvil wasn’t the Oath Stone. We had no such stone. Our oaths were taken upon a Sword (and all vows, including coven bonds, were still made in blood). But the anvil was used in every single ritual that we performed as a way to call upon Tubal Cain, the Forge Master. We struck the hammer to the anvil three times, each time pausing to call his name. It was powerful. It still gives me chills when I call to him this way.

When my son was about 5-years-old, I was away from home and the anvil was sitting at its place (when not in ritual use) at our family’s hearth. He picked up the hammer and started striking, which brought his father running from the other room. He stopped the boy and asked him what he thought he was doing, intending to scold him for disrespecting this sacred tool. My son, not missing a beat, looked his father in the eyes and said in a voice filled with reverence, “Daddy, this is how we talk to God.”

The symbolism of the forge is powerful, alchemical, mystical. The anvil is the foundation of Stone. The forge is the transformational Flame. The bellows are the Breath. The quench is the Sea (both womb and tomb).

Ours is a path of the Mysteries of Life and Death and all that lies Between. It is Creation and Destruction. Destroying in order to Create. Mixing Fire and Water to temper the steel and make it stronger. Knowing how and when to do that in the right proportion.

And the anvil is the rock, the hard place on which this great work happens. It is the altar on which we are pounded and shaped (at our own request!) into something useful, something beautiful, something dangerous.

The earliest anvil’s were actual stones, of course, and a great many cultures have had ceremonies involving oathing and coronation stones. The Lia Fail (Stone of Destiny) and Jacob’s Pillow are two well-known coronation stones upon which dynasties of monarchs took vows to serve God and country. Furthermore, the custom has long-existed in Celtic countries for couples to make their wedding vows upon an oathing stone.

Within this Tradition, the Anvil as the Oath Stone sits at the base of the Stang when the Compass is drawn, along with the Cauldron.
Posted by Laurelei at 12:11 AM No comments: