Witch Ethics, Ardanes and the Rede 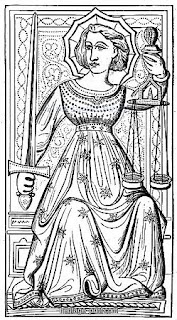 I (Laurelei) was trained in a variation of Cochranite Craft, and we had no Ardanes (Witch Laws). Nor did we give oath to the Wiccan Rede. We did, however, expect each member of our Clan to spend time developing a personal statement of ethics that reflected his/her own moral convictions. The statement was not so much a codified set of rules, but an understanding that one has with oneself regarding what is right and wrong. Having looked deeply into that well, woe be unto the Witch who does not hold to her own moral standards!

The Craft (in its truest sense) does not offer a moral guidepost. It is a system of magic, a way of reaching out to the Unseen World and being more closely a part of it. The Black Goddess, White Goddess, Tubal Qayin -- do not look to them for your moral compass, for they are Nature's Compass, Magic's Compass. They are Powers, neither "male-" nor "bene-" (bad, good).

You are responsible and accountable to yourself, your family, your cuveen/clan, your community, your country and your world. How you keep yourself on your path is up to you.

That being said, as a piece of Craft Lore (and even as a starting place in thinking about your own ethics), it is interesting to look at the Ardanes and the Rede. Bear in mind that these pieces are modern constructs with occasional bits of arcana thrown into the mix. Some of the advice here -- for we can only truly consider it advice and not Law -- is worth a look. Other pieces seem very out of keeping with the Craft as we know it.

The Ardanes or Ordains first appeared in Craft documentation in 1957, when Gerald Gardner presented them to his coven after a disagreement about his own interactions with the media while insisting on secrecy within the coven. No known record of them in any older documentation exists prior to that date. While it is possible that he received them from his own initiator and teacher, the mix of archaic and modern phrasing in the Ardanes would suggest that they were created at that time.

Doreen Valiente, among others, was suspicious of these Laws which (unsurprisingly) eventually led to her ousting from the coven by Gardner.

These Laws have had several iterations, and they vary amongst covens/Traditions who hold to them. Some are anachronistic, misogynistic, or oddly Christo-centric. A fairly close copy of the original Gardnerian Ardanes exists here.

Many, if not most, Witchcraft traditions use the Wiccan Rede as the foundation of their code of ethics. The first published form of the Wiccan Rede is a couplet that appeared in 1964 by Doreen Valiente: “Eight words the Wiccan Rede fulfill, An it harm none, Do what ye will.” Rede is a Middle English word meaning “advice or council,” while, in this case, an is an archaic conjunction meaning “if.” Other versions, including much longer poems, have been written since then, but this is the basic tenant of Wiccan ethics.

Much exegesis has been written on this topic, and debates are continually waged within the Wiccan and Witchcraft communities over the exact meaning and execution of these few words. On the one hand, the Rede seems simple enough. It is a mandate to do no harm, much like the Golden Rule or the Hippocratic Oath. On the other hand, words like “harm” and “will” can be seen as vague or amorphous to members of disparate traditions. Is “harm” the same or different than “hurt?” What about “will” and “want?” Or is “will” closer to True Will?

Then there’s the question of self-defense. Is it ever okay to harm someone if they’re attacking you? A common psychic shielding technique involves mirroring negative energy back to its sender. If this causes harm, have you violated the Rede? The logic for any of these questions can get rather circular as you ponder them, and if you follow a debate of this sort online, it will often do just that.

Some traditions use other similar creeds (but with different implications) as the basis of their moral and ethical codes. One prominent standard, though not Craft in origin, is the Law of Thelema which says, “Do what thou will shall be the whole of the law. Love is the law; love under will.” Aleister Crowley wrote these words in 1904, inspired in part by the writings of Francois Rabelais in 1543. Rabelais had said, “DO AS THOU WILT,” because men who are free are inclined to virtue and disinclined to vice. Here, we are absolutely talking about doing one’s True Will and not simply doing the whim of the moment.

Ultimately, we encourage you to pursue a line of *independent* thought regarding ethics and a Code. In other words: know what YOU believe to be ethical behavior and hold to it. Remember that ethics and morals are not really about being held accountable to a power higher than yourself. If you believe an action is wrong, and you proceed in doing it, you will
pay a price for doing it.
Posted by Laurelei at 5:05 PM