Lay of the Arthame
by Nigel Jackson
This is the Metal: it dropp’d from the sky,
A ferrous tear of the Fire-Drake’s eye,
That burned through cloud and seared the soil
and set the furious seas a boil,
That lay in ancient pores of earth,
Til Blacksmith’s brought it to birth,
Thrice-purified in Tubalo’s fire
It suffered the ordeal of the pyre; cast into waters, hissed it’s song,
The starry viper’s iron tongue was tempered on the anvil-stone,
Til radiant as changeless bone,
With whispered charge and wordless spell,
The gramarye of Azazel.
The edge was ground and thus was made,
The narrow road of sharpened blade.
This is the metal: ‘twas shaped by Cain
Who wrought the heavenly Arthame. 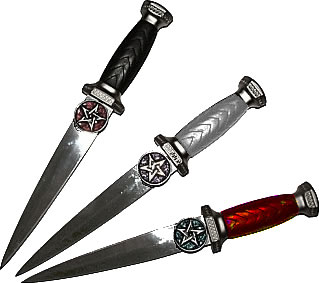 There are three knives associated with our tradition. These knives each represent the three realms, and the White Goddess, the Black Goddess, and the Red God. Each knife is used in a very specific and exclusive way.

The first of the knives is the black-handled blade, the Athame. It is the tool of the first realm and relates to the Black Goddess. The Athame is used for cutting and describing numen. It is used primarily to cut and direct energy links and sometimes to delineate sacred space. Gate portals are cut with the Athame, and it is the Witch's primary weapon when in liminal space.

The third knife is the red blade, the Shelg. It is the tool of the third realm and relates to the Red God of the Forge, Tubal Qayin. The Shelg is used for blood magic and sacrifice. It may be used to open a small wound in the flesh in order to produce blood for oath-taking or binding links. It is also used during the Housle to activate the Red Meal as a true sacrifice. Although sterile lancets are often used in place of the Shelg for safe bloodletting in small amounts, the Shelg is still symbolically passed over the wound to seal the link to Qayin.

The three knives are used in a test of fate during initiation to bind the Witch in service to one of the three deities of our Clan.
Posted by Natalie at 4:02 PM