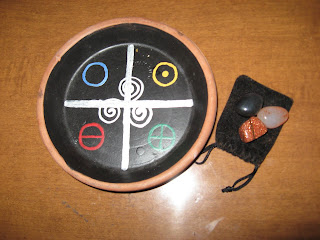 In our tradition the Summer Solstice is associated with the Castle of Stone, the King of which is the Oak King Cernnunos, and the treasure of which is the stone bowl.  The stone bowl is a very real working tool in this tradition, and is one of the first tools a witch procures.

Within this tradition of Craft, we recognize the demand for energy exchange when working magic. This exchange, or sacrifice, happens whether we are aware of it or not. It varies beyond our understanding, as sometimes a small charm can require a great sacrifice, whereas a huge spellworking may not require any exchange at all. It is because of this element of chance that we choose to be aware and actively involved in this sacrifice whenever we perform magic. Furthermore, we understand that every act of magic (whether selfless or selfish) requires this sacrifice, and we perform this divination prior to every spell.

The three stones (see below) are cast into a shallow dish bearing the markings shown above. These markings form a central glyph  representing both the laying of the compass and the wheel of the year.  It is divided into quadrants, each with a circular symbol that represent the solar holidays and the four castles. In the center of the design is a triskle, representing the Spiral Castle, the axis on which the compass turns.

The three stones are one of white, one of black, and one of red.  They may be found naturally in these colors, or may be ordinary river pebbles painted the appropriate colors. The three stones represent the White and Black Goddesses and Tubal Cain. The red stone, or Tubal Cain stone, is the indicator stone when casting into the bowl.

To use the stone bowl

Cast all three of the stones into the bowl. Whichever stone the red stone is closest to indicates to which Goddess the sacrifice will be made. This will flavor the nature of the sacrifice.

The distance between the black and white stones indicates the time and/or severity of the sacrifice to be made.

Stone Castle (the green crossed circle) – money/material
examples: gifting a personal item to someone, donating money to a charity, volunteering on a project without compensation, etc.

The Spiral Castle (the silver triskle) – no sacrifice necessary 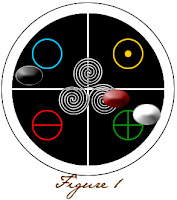 Figure 1: The red indicator stone is nearest to the white stone, which is in the Castle of Stone. A material/monetary sacrifice to the White Goddess is called for here. The white stone and the black stone are far apart in the bowl, so the sacrifice must be large. 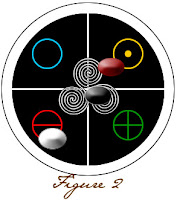 Figure 2: The red indicator stone is nearest to the black stone which in in the Spiral Castle, so no sacrifice is necessary for this working. 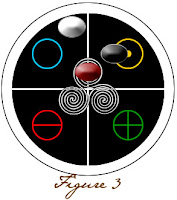 Figure 3: The red indicator stone is nearest to the black stone in the Castle of Revelry. A sacrifice of abstinence is called for in honor of the Black Goddess. The black and white stones are near to each other in the bowl, so the sacrifice is minimal.
Posted by Natalie at 10:29 PM