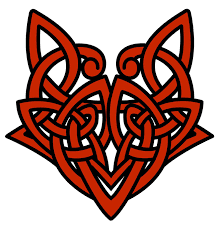 Fox is credited with being a "cunning one" who is "strong in council." In nature, the fox is stealthy and clever. He knows when to stay hidden and when to come out into the open. Fox can teach you the discernment to know when to speak your mind and when to keep silent. Similarly, Fox teaches invisibility.

Fox is very intelligent, diplomatic, and charming. These qualities can be seen as sly and deceitful, though, when used dishonestly. Fox is often regarded as a trickster, for this reason.

He is "quick on his feet" and can teach you to make quick decisions and put them into action right away. He can also teach you to navigate obstacles quickly and decisively.

Fox is connected to Raven in this month's totems by virtue of them both being messengers who can access all Realms. Foxes can climb into the high branches of the trees (Upperworld), are astute navigators and runners on the ground (Middleworld), and dig dens below ground (Underworld).

Names for fox in different lands have been used by chieftains, princes, and advisers. Reynard means "strong in council," and Louernia means "son of Fox."

Foxes are usually red and white (or black and white) and are therefore linked to the three sacred colors. Animals with this sort of coloring were generally seen as sacred or special by the Celts, and fox fur has been discovered in princely or religious burial sites.
Posted by Laurelei at 1:11 PM 1 comment: