The LBRP for AFW Witches

In the late winter and early spring of  2013, Glaux and I began adapting the Lesser Banishing Ritual of the Pentagram for use within the American Folkloric Witchcraft model. With the help of our coven sister, the Pythia, we wrote the ritual below and published it on this site on 3/25/2013.

Our variation of the LBRP is influenced by Aleister Crowley's Star Ruby ritual (itself an adaptation of the LBRP).  It uses forms of the Red God (the Witchfather) and the Black and White Goddess (the Witchmother) in place of the traditional Hebrew names of God.  It also replaces the Archangel guardians with the four Watchtowers or Arthurian Castles that are incorporated into this Tradition.

The purpose of the LBRP is to banish all undesired or unwanted forces from oneself and the local area and to create Sacred Space. Many magicians practice the LBRP as a daily magical exercise to discipline the mind and create internal and external peace.

We offered this variation three and a half years ago (as of the time of this update). I have to admit that while we really enjoyed creating this ritual as an intellectual exercise, and we got good results when using it before ritual to banish negative energies, neither of us made it a daily practice (at least not for long).

Have any of our readers used this ritual consistently? What have your results been? Share your experiences in the comments below. If anyone wants to join me for some magical experiments related to this ritual, share a comment or write to me at laurelei@asteriabooks.com. I'm going to make the AFW-LBRP part of my morning routine before I go to work this autumn and winter to see what sort of results I get. I'll post an update in the late winter or early spring about my results. It is also my hope to film a video of me or one of the members of Coven Caer Sidhe performing this ritual.

Also, as a note for readers who have followed the blog and are familiar with this ritual already, I have corrected some of the Latin in the text below. My apologies for the errors in the earlier version. 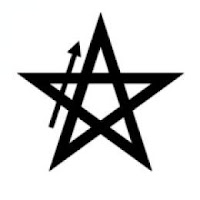 Face East. Before you in the air, draw a giant pentagram using your right index finger (or if you prefer use the whole hand) in the direction shown in the illustration. Imagine that pentagram shining in front of you. Take a step forward with your left foot. Just the left. Leave your right one where it is. The size of the step will be determined by your space. At the same time that you step forward, thrust your open hands, side by side, palms  downwards, into the pentagram, as if you are diving in. This is called the "Sign of the Enterer." As you enter the pentagram you will say one of the names of the Witch God or Goddess.

Here, at the first pentagram you will shout “Lucifer."  Lucifer is the Light-Bringer, the Lord of Illumination of the World and the Mind.  He is called in the East as the bright aspect of Tubal Cain, and the lord of elemental Fire.  Lucifer is called with a jubilant shout to celebrate the rising of the sun in the East.

Draw a pentagram in South. Enter the pentagram while singing “Goda." Goda is the White Goddess, the Queen of the Seelie Court and Lady of Death-in-Life.  She rules the Southern quadrant, the place of elemental Earth.  Her name is sung for she is the Lady who shall "have music wherever She goes."

Make the “shhh" gesture and turn to the right, drawing an arc.

Draw a pentagram in West. Enter the pentagram intoning “Azazel" in a low voice. Azazel is the Lord of the West, the place of elemental Water.  He is Tubal Cain in his aspect as the Lord of the Dead, and is both the angel who taught magic to the daughters of man and the angel who collects our souls for their great rest.  The West is the place where the sun goes to die, and it is to the West that we all must travel upon death.  Azazel's name is intoned in a low voice of mourning and respect.

Make the “shhh" gesture and turn to the right, drawing an arc.

Draw a pentagram in North. Enter the pentagram whispering “Kolyo".  Kolyo is the Black Goddess, the Weaver of Fate and the Lady of Life-in-Death.  She rules the North, which is the home of elemental Air.  Her name is whispered for she is an ancient mystery.

Make the “shhh" gesture and turn to the right, drawing an arc. This final arc connects all four pentagrams into a single circle.


You are now standing in the center of a circle of white light. At each quarter there is a giant, glowing pentagram. Now we post a watchtower between each pentagram. Face the southeast and open up your arms. Stretch out like you are a cross: feet together, arms out at shoulder height. Call the watchtowers to their posts. Stand in the cross position and say:

These are four of the great castles of myth and legend.  The Castle of Stone is Caer Bannog, the Castle of Glass is Glastonbury, the Castle Perilous is the silvery Grail Castle, and the Castle of Revelry is the Golden Castle of the Beacon of Awen.

Spread your feet and lift your arms to stand in pentagram-position and say: “Around me flame the pentagrams. Above me shines a six-rayed star, and below me spins a three-armed triskle.  I stand within the Spiral Castle.  I am the World Tree." This declaration places you in all three realms, and allows you to traverse shamanic space.  It states that you are the World Tree, and that you ride the stang to other realms.