The Fetch and Flight 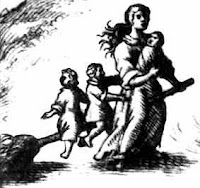 Witches do three things, and do them well.  Firstly, witches do witchcraft. This is the action of casting spells, conjure, hoodoo, cunning, rootwork, powwow, folk-magic, or what-have-you.  Secondly, witches honor the horned Witch Father, and the Goddess of life and death.  There are many names and expressions of these energies, but they are common to all witches.  Finally, witches fly.  How witches fly is a matter of debate.  Flying is not an act of levitation, but it is a means of travel.  Flying is simply the act of sending your astral body (or, as we call it, the black soul) out to travel through the realms.

There are many ways to fly.  One may use drumming, chanting, or dancing to achieve an altered state of consciousness. Warricking and stropping are another traditional way to "get out of yourself".  Also, the use of certain herbs and compounds, such as hallucinogens, flying oinments, alcohol, and herbal incenses, can produce or heighten the effect of flight.

Although flight can be achieved through the simple projection of the astral body, witches have several traditional techniques for assisting the black soul while it is mobile.  These include use of a gandreigh, or riding pole, such as a broom, a stang, a staff, or a hobby horse, and the construction of a fetch.

A fetch is an etheric construct that the witch projects herself into for the purpose of astral flight.  This construct can take the form of her own body, or that of a totemic spirit.  Totemic spirits are desirable for this work because the witch already has a unique bond with that creature, and therefore can easily assimilate herself into the new etheric body.

The fetch can be thought of as an inanimate shell of energy waiting for your own astral self to inhabit and enliven it.  It can travel through all the realms as astral space, and can be seen in the physical realm by those that are inclined to mediumship.

Just as with an incorporeal familiar spirit, it is wise to create a kind of "home" for the etheric construct
of the fetch to inhabit when not in use as a vessel for the astral body.  A crystal, a statue of the animal, or a spirit bottle are all good physical anchors for this energy.

As with all things, the more you practice, work with, and feed this construct, the more effective it will be when you wish to use it. If you wish to stop working with a particular fetch, simply reabsorb its energy into yourself and deconsecrate or destroy the fetch's house.  This should, however, be avoided if at all possible, as fetches build up numen with time and use, and can become quite powerful in their own right.  They are, in fact, a kind of egregore purposed as a vessel for your own use.

You may wish to cue your transformation from astral body to fetch construct to the use of a charm, such as the Scottish witch Isobel Gowdie did as recorded in the record of her trial in 1662.


I shall go into a hare,
With sorrow and sych and meickle care;
And I shall go in the Devil's name,
Ay while I come home again.
(sych: such; meickle: great) To change back, she would say:
Hare, hare, God send thee care.
I am in a hare's likeness now,
But I shall be in a woman's likeness even now.

Listen below to a modern interpretation of the Gowdie shifter's chant by by Northumbrian folk singer and storyteller Sedayne (Sean Breadin).
Posted by Natalie at 11:41 PM