Stations of the Wheel
East and West, Samhain and Beltane, October & May, Gates of Fire and Water, Blood and Merry Moons 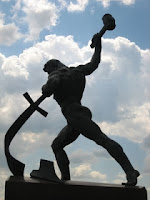 Of special interest to Witches is the concept of the Smithing God. Metalsmiths were among the first alchemists, and, by virtue of their powers of transmutation of ore into steel, they were once credited with magical powers. Blacksmiths were considered the mages par excellence of this group, and today we find iron horseshoes (iron ore transformed into the God's horns) prized as good luck symbols. The Smithing God is often associated with lameness, which is attributed to a folk practice of laming the village smith so that such an important member of society could not leave. The shambling step of the lamed God is echoed in the most basic Witch dances.

Tubal Cain appears to mean "he who spices the craft of Cain." Gordon Wenham suggests that the name "Cain" means "smith”, or that he is called "Tubal Cain" in order to distinguish him from the other Tubal, the son of Japheth. Henry Morris suggests that etymologically, his name is "the progenitor of the name of the Roman God Vulcan."  Tubal Cain is sometimes thought to be the progenitor of the Celtic peoples.  He is the “first ancestor” and the Witchfather.

Genesis 4:22 says that Tubal Cain was the "forger of all instruments of bronze and iron" or an "instructer of every artificer in brass and iron". Although this may mean he was a metalsmith, a comparison with verses 20 and 21 suggests that he may have been the very first artificer in brass and iron. T. C. Mitchell suggests that he "discovered the possibilities of cold forging native copper and meteoric iron." Tubal-cain has even been described as the first chemist.

According to the Book of Enoch, which brings Azazel into connection with the Biblical story of the fall of the angels, located on Mount Hermon, a gathering-place of demons from of old.  Azazel is represented in the Book of Enoch as one of the leaders of the rebellious Watchers in the time preceding the flood; he taught men the art of warfare, of making swords, knives, shields, and coats of mail, and women the art of deception by ornamenting the body, dying the hair, and painting the face and the eyebrows, and also revealed to the people the secrets of witchcraft and corrupted their manners, leading them into wickedness and impurity.

According to Luciferian tradition, Azazel and Tubal Cain are the same entity.  Azazel having chosen Tubal Cain as his earthly vessel when he lead the rebellion of the fallen angels.  Tubal Cain is of the line of Cain, through his father Lamach, marking him with the holy blood of Lucifer.  By teaching the daughters of man witchcraft, Azazel/Tubal Cain became the Witchfather. 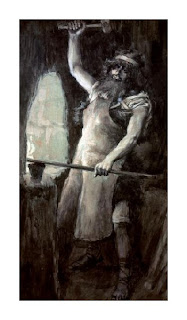 Prayer of Cain Al' Shajarat
(or Tree/Green Cain, Master of the Forge)

Holy Master,
First and Most Cunning of Tillers
By fragrant smokes
And the power of Thy name
I hallow Furnace, Forge, and Flame:
Cain Al' Shajarat,
Sa'Ira, Sa'Ira, Sa'Ira.


Holy Master,
Unto the Craft of the Green
And the Spirits of the Wise
Bear thou from shadow Celestial Fire
And cause the Dead the rise:
Cain Al' Shajarat,
Sa'Ira, Sa'Ira, Sa'Ira.


Holy Master,
Nine times they Name be sung;
Temper these hands and their Work
In thy Fornax and Forge
For Thine is The Kingdom!
Cain Al' Shajarat,
Sa'Ira, Sa'Ira, Sa'Ira.

~Ars Philtron by Daniel A. Schulke