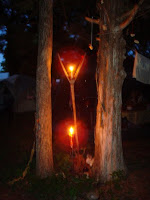 The stang is the central tool and main altar of our tradition. A stang, in its most basic form is simply a forked stick set with its long end into the ground. It acts as an axis on which magic can turn, and as a pole that can be "ridden" by the shaman or witch into different realms. Its forks represent the horns of the Witch Lord.

The stang entered modern Craft by the hand of Robert Cochrane, who called it as "sacred to the People as the Crucifix is to the Christians."  I've written about Cochrane's use of the stang in my July 2011 post on Treading the Mill.

The stang is sometimes represented by a iron-tined pitchfork or a pole with the skull of a horned beast on it. Often in these configurations there will be a candle or torch lit between the two horns or tines, in the style of the icon of Baphomet, or as is shown in this woodcut from 1594 of a sabbat at Treves.


Any wood is suitable for use as a stang, although ash, with its connections to Yggdrasill, the tree on which Odin was hung shaman-like for nine days, is a popular choice. Our own stang is based on Him that we honor as the Witch Lord, T'Qain. It is therefore represented by a ram's skull.  It represents both His presence and the Spiral Castle.

Although not as popular as motif as, say, riding a broomstick, there are many examples of witches using the stang to fly in early woodcuts as is shown by the examples below.


The stang has antecedents in the Yggdrasill of Norse lore, the Poteau Mitan of Haitian Voudon, and the ascending-pole birch tree of the Yakut shamans.  It is both a world-pillar on which the cosmos (represented by the witches compass) turns and a gandreigh.


For more information I suggest reading the writings of Robert Cochrane, and Nigel Jackson and exploring the links below.

How to Use a Stang
A Special One, But Still a Pole
Posts Labeled "Stang" from This Blog
Posted by Natalie at 10:03 PM