In our tradition we divide the year not only by eight solar and agricultural holidays, but also by the Kalends. We celebrate twelve months of the year by the common calendar, plus a special thirteenth month for Samhain.  These month cycles are associated with different totemic spirits. Each month is assigned an animal, a bird (or other flying creature), and a tree. August's totems are Horse, Apple, and Swan. 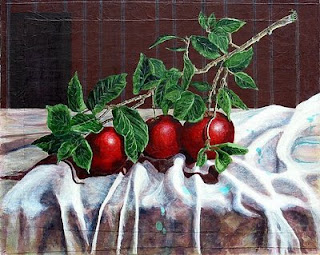 The Apple is a deciduous tree. The wild crab-apple is Britain’s only indigenous type. It is related to the rose family, along with Hawthorn, and so it develops thorns from spurs on its branches. It has gnarled trunks, often growing at crazy angles to “hide” amongst other trees. It’s leaves are almost heart-shaped, and its blossoms are deep pink with a scent similar to honeysuckle, which attracts bees. Some types of Apple trees can hold fruit on the branches throughout the winter.

This tree represents the choice between similar and equally attractive things. It is one of the “Seven Chieftain Trees” of the Celts. It’s fruit and bark are used in tanning. 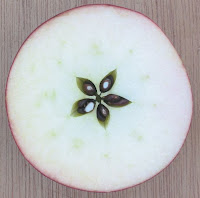 The Apple is associated with love spells, likely due to its associations with Aphrodite. The “Gardens of the Hesperides” contained an especially sacred apple tree that granted immortality. The Hesperides ,nine beautiful maidens, representatives of Aphrodite, guarded this tree, and a serpent was coiled at its roots. The Greeks sometimes saw the sun as a crimson apple sinking into the sea, being replaced by Hesperus (Venus) the ‘star’ sacred to Aphrodite. An apple cut open crosswise reveals the sign of the pentagram, a symbol also associated with Aphrodite, due partially to the fact that the planet Venus, the heavenly embodiment of the Goddess, cut a perfect pentagram in the sky over the course of four years. The Apple’s association with Aphrodite is further strengthened by the golden apple, engraved with the words “For the Fairest,” that was awarded to her by Paris and which resulted in the beginning of the Trojan War.

The Apple has long been sacred to the Celts, as well. One of its sacred islands, Avalon, is named the “Isle of Apples.” Old apple trees are more likely than other types of trees to host mistletoe, making them sacred to Druids. Merlin also had a sacred apple orchard. Apple cider was said to be the most sacred drink of the Druids.
Posted by Laurelei at 10:22 AM