In our tradition we divide the year not only by eight solar and agricultural holidays, but also by the Kalends. We celebrate twelve months of the year by the common calendar, plus a special thirteenth month for Samhain.  These month cycles are associated with different totemic spirits. Each month is assigned an animal, a bird (or other flying creature), and a tree. March's totems are Hare, Birch, and Goose. 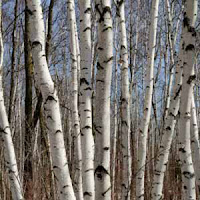 The Birch Tree is the first tree of the New Year according to Robert Grave's Celtic tree calendar. It has a straight white colored trunk and branches, and its leaves are bright green. Birch Trees represent the Otherworld. This tree is the first to bud and is considered a sign that spring is just around the corner. The Birch is considered a protective wood for women, as it is associated with safe childbirth and protection from the Underworld.

The Birch is the symbol of new beginnings, the start of new plans and taking significant steps in a forward direction. It is the wood most commonly used to kindle the magical fire. The Maypole is frequently made of Birch, with pagans in Wales preferring to use living, standing Birch Trees for their Maypoles. Birch is the wood burned for the Beltaine fire. It is also the wood used for correction or punishment. Until recently, canes and rods made of Birch were the instrument of choice for schoolmasters and law enforcement officials in the British Isles.

Birch indicates fortune, change and good luck. The element associated with the Birch is water. Its gender association is female.
Posted by Laurelei at 9:43 AM