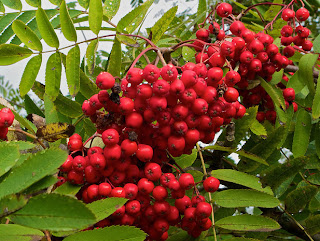 Rowan
The Rowan is sometimes referred to as the “Tree of Life” or the “Lady of the Mountain,” this tree is thought to protect against enchantment. The wood of this tree was often used for rune staves (sticks which are engraved with the Ogham or runs and used as a divinatory tool) and as a divining rod for metal.

Also used as a generally protective talisman, the branches of the Rowan Tree are hung over the doors of houses and barns to protect the inhabitants. It is planted in cemeteries in Wales to guard over the spirits of the dead. Babies’ cradles are often made of Rowan wood, as it is thought to keep death and harm away from the young. Some references claim that Rowan wood protects one from the Faery.

The Rowan berry has a pentagram in its center and is red in color. A necklace strung of the berries is said to protect the wearer from harm.

Rowan indicates an ability to contain control of your senses, provides protection from harm and a protection when engaged in battle. The element associated with the Rowan is Fire, and its gender association is male. 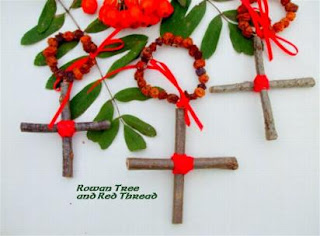