The Goat was depicted in the zodiac through Capricorn – a time of year for culminating new moves or initiating them.

The Goat’s horns indicate an ability to perceive future and are also associated with weapons and defense. Its thick coat enables it to survive hostile conditions.

In Greece, Pan, Amalthea, and the horn of plenty are all connected to the Goat.

Another aspect of the goat is the mountain goat, who typifies sure-footedness and seeking new heights. It has thick wool and skeletal flexibility. Kids can stand almost immediately after birth, which shows their physical adeptness and strength.

The Yule Goat is one of the oldest Scandinavian and Northern European Yule and Christmas symbols and traditions. Originally denoting the goat that was slaughtered during the Germanic pagan festival of Yule, "Yule Goat" now typically refers to a goat-figure made of straw. It is also associated with the custom of wassailing, sometimes referred to as "going Yule Goat" in Scandinavia.

A Swedish custom that continued up to 1940–1960 in different parts of the country, was the Yule Sacrifice (Juleoffer) involving a person dressed as a goat which, after undergoing a mock-sacrifice, is resurrected. Sir James George Frazer described its performance as follows:


The actor, hidden by a coverlet made of skins and wearing a pair of formidable horns, is led into the room by two men, who make believe to slaughter him, while they sing verses referring to the mantles of various colors, red, blue, white, and yellow, which they laid on him, one after the other. At the conclusion of the song, the Yule Goat, after feigning death, jumps up and skips about to the amusement of the spectators. 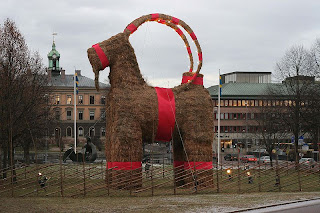